Items related to Waking the Giant: How a changing climate triggers earthquake...

Waking the Giant: How a changing climate triggers earthquakes, tsunamis, and volcanoes 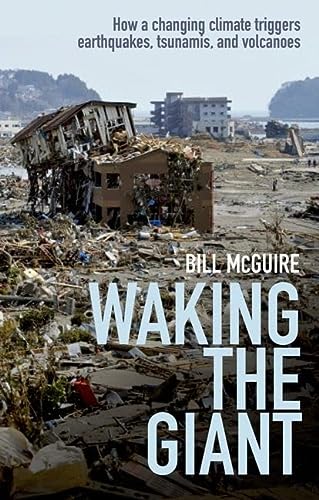 Twenty thousand years ago our planet was an icehouse. Temperatures were down six degrees; ice sheets kilometres thick buried much of Europe and North America and sea levels were 130m lower. The following 15 millennia saw an astonishing transformation as our planet metamorphosed into the temperate world upon which our civilisation has grown and thrived. One of the most dynamic periods in Earth history saw rocketing temperatures melt the great ice sheets like butter on a hot summer's day; feeding torrents of freshwater into ocean basins that rapidly filled to present levels. The removal of the enormous weight of ice at high latitudes caused the crust to bounce back triggering earthquakes in Europe and North America and provoking an unprecedented volcanic outburst in Iceland. A giant submarine landslide off the coast of Norway sent a tsunami crashing onto the Scottish coast while around the margins of the continents the massive load exerted on the crust by soaring sea levels encouraged a widespread seismic and volcanic rejoinder.

In many ways, this post-glacial world mirrors that projected to arise as a consequence of unmitigated climate change driven by human activities. Already there are signs that the effects of climbing global temperatures are causing the sleeping giant to stir once again. Could it be that we are on track to bequeath to our children and their children not only a far hotter world, but also a more geologically fractious one?

The author succeeds at interpreting complex earth science into compelling reading for a popular audience. Anyone with an interest in climate change, geology, and atmospheric science will enjoy this work. (Jeffrey Beall, Library Journal)

Professor Bill McGuires new book is a well-timed and beautifully written work on the links between the Earths climate and its geological processes. (The Climate Hub)

Bill McGuire is an academic, science writer and broadcaster. He is currently Professor of Geophysical and Climate Hazards at UCL. Bill was a member of the UK Government Natural Hazard Working Group established in January 2005, in the wake of the Indian Ocean tsunami, and in 2010 a member of the Science Advisory Group in Emergencies (SAGE) addressing the Icelandic volcanic ash problem. His current research focus is the climate forcing of geological hazards. His books include

1. Waking the Giant: How a Changing Climate Triggers Earthquakes, Tsunamis, and Volcanoes

2. Waking the Giant: How a changing climate triggers earthquakes, tsunamis, and volcanoes

3. Waking the Giant: How a changing climate triggers earthquakes, tsunamis, and volcanoes

4. Waking the Giant: How a Changing Climate Triggers Earthquakes, Tsunamis, and Volcanoes