Items related to An Infinity of Things: How Sir Henry Wellcome Collected...

Larson, Frances An Infinity of Things: How Sir Henry Wellcome Collected the World

An Infinity of Things: How Sir Henry Wellcome Collected the World 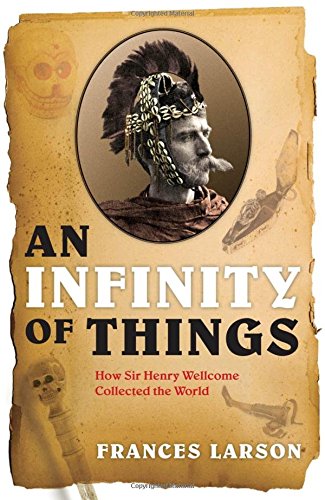 An Infinity of Things tells the story of one of the largest private collections ever created, and the life of the man behind it. Wellcome planned a great museum filled with treasures from all corners of the globe, charting the history of human health from prehistory to the present day. The breadth of his vision was matched only by the depth of his pockets.

During the opening decades of the twentieth century he acquired a collection so large that later generations of staff took to describing its contents by the ton. But Wellcome's museum was never finished, and his collection was still stored in vast warehouses when he died, unseen and incomplete. Today, after decades of work by his successors, artefacts from the collection can be seen in museums and libraries throughout the world.

Demonstrating what can happen when a collector's aspirations are left unconstrained by wealth, Frances Larson explores Wellcome's life through his possessions, revealing the many tensions in his character: between his talents as a businessman and his desire for scholarly recognition; his curiosity and his perfectionism; and his philanthropic aspirations and his drive for personal glory.

A fascinating book and one for the shelves of anyone interested in science, collecting - or just a plain good read. (Ian Simmons, Fortean Times)

Featured in 'The best books of 2009' (Eleanor Harris, New Scientist)

Larson's book is a Poe-like tale of a man who literally became buried under his own unquenchable avarice. (Wendy Moore, Sunday Telegraph)

Accurately billed not as a biography but as "the biography of a collection" the book is penetratingly honest. (Andrew Robinson, New Scientist)

In places it reads as a gripping story of a bit of a monster. (Andrew Robinson, New Scientist)

1. An Infinity of Things: How Sir Henry Wellcome Collected the World