Items related to The Riverside Chaucer: Reissued with a new foreword...

The Riverside Chaucer: Reissued with a new foreword by Christopher Cannon 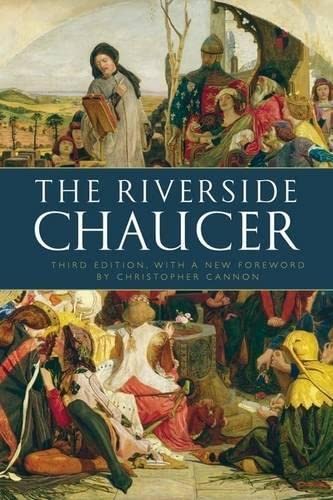 The third edition of the definitive collection of Chaucer's Complete Works, reissued with a new foreword by Christopher Cannon. Since F. N., Robinson's second edition of the The Works of Geoffrey Chaucer was published in 1957, there has been a dramatic increase in Chaucer scholarship. This has not only enriched our understanding of Chaucer's art, but has also enabled scholars, working for the first time with all the source-material, to recreate Chaucer's authentic texts. For the third edition, an international team of experts completely re-edited all the works, added glosses to appear on the page with the text, and greatly expanded the introductory material, explanatory notes, textual notes, bibliography, and glossary., In short, the Riverside Chaucer is the fruit of many years' study - the most authentic and exciting edition available of Chaucer's Complete Works.

indispensable for scholars and beginners alike ... Professor Larry D Benson ... deserves a medal both for organizing a formidable team of American and British scholars and for the excellence of his own contributions. (IBooks)

an enormous advance on its predecessor ... particularly in its informative introductory materials, glossary ... and the addition of explanatary notes ot the foot of each page. At well over 1,300 pages, it must be a bargain. (Country Life)

This is a comprehensive, readable ... and up-to-date edition of the first major English poet ... the Riverside editors have served their poet handsomely. The new texts are improvements on which reveal just how brilliant an editor Robinson was, despite his limited access to the manuscripts.' (The Guardian)

The Riverside Chaucer . . . is beautiful to look at and a sensuous delight to handle. Within its stout covers the entire works of the father of English literature are displayed in fine clear type with very adequate footnote glossaries. The linguistic, historical and literary scholarship are a masterpiece of Anglo-American collaboration. The reading of Chaucer is made into an exquisite pleasure, not a philological chore. This is the best edition of Chaucer in existence. (Anthony Burgess)

It is a sheer pleasure to read. (Good Book Guide)

2. The Riverside Chaucer: Reissued with a new foreword by Christopher Cannon