Items related to Passport to Peking: A Very British Mission to Mao's...

Passport to Peking: A Very British Mission to Mao's China 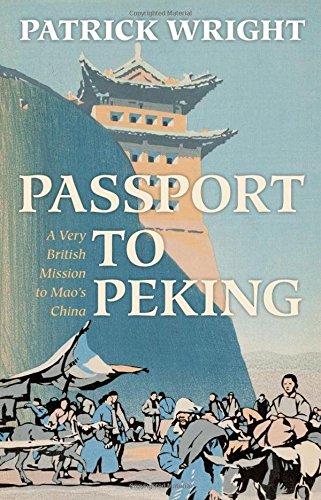 President Nixon's famous 1972 trip has gone down in history as the first great opening between the West and Communist China. However, eighteen years previously, former prime minister Clement Attlee had also been to China to shake Chairman Mao by the hand.

In the second half of 1954, scores of European delegations set off for Beijing, in response to Prime Minister Chou En-lai's invitation to 'come and see' the New China and celebrate the fifth anniversary of the Communist victory. In this delightfully eclectic book, part comedy, part travelogue, and part cultural history, Patrick Wright uncovers the story of the four British delegations that made this journey. These delegations included an amazing range of people from the political, academic, artistic, and cultural worlds of the day: Clement Attlee and his former Health Minister, Nye Bevan; dapper and self-important philosopher A. J. Ayer; the brilliant young artist-reporter Paul Hogarth; poet and novelist Rex Warner (a former Marxist who had just married a Rothschild); and the infuriatingly self-obsessed Stanley Spencer who famously lectured Chou En-lai on the merits of his hometown of Cookham, but who emerges as the unlikely hero of the story.

Using a host of previously unpublished letters and diaries, Patrick Wright reconstructs their journey via the USSR to the New China, capturing the impressions - both mistaken and genuinely insightful - of the delegates as they ventured behind both the iron and the bamboo curtains. Full of comic detail of the delegates and their interactions, it is also a study of China as it has loomed in the British mind: the primitive orient of early western philosophy, a land of backwardness that was used to contrast with the progressive dynamism of Victorian Britain, as well as the more recent allure of revolutionary transformation as it appeared in the minds of twentieth century Britons.

A book bulging with anecdotes and digressions (Neal Ascherson, London Review of Books)

Highly enjoyable...thoughtful and closely researched...His portrait of Spencer in particular is a work of comic genius (Dominic Sandbrook, The New Republic)

...this is a fascinating recreation of a moment in British political and cultural history. (History Today)

Patrick Wright's history of their eccentric trips is learned and charming. (Boyd Tonkin, The Independent)

In his astonishing last half-dozen books, he has established himself not only as the champion ironist and caustic critic of that weird historical compound,'Englishness', but also a social historian of an inimitable kind. (Fred Inglis, The Independent)

As ever with Wright's work the sheer density of thought, allusion and fact is staggering - but what is more amazing is the deftness with which he spins from this a gossamer and entrancing narrative thread. (Will Self)

Patrick Wright is a writer and broadcaster with an interest in the cultural dimensions of modern life. He is the author of a number of highly acclaimed best-selling history books, including The Village that Died for England, Tank (described by Simon Schama as 'a tour de force'), and Iron Curtain, which John le Carre described as 'a work of wit, style and waggish erudition.' He has written for many magazines and newspapers, including the London Review of Books, the Guardian, the Washington Post, the Independent, and the Observer, and has made numerous documentaries on cultural themes for both BBC Radio 3 and 4. His television work includes The River, a four-part BBC2 series on the Thames. He is also a Professor at the Institute for Cultural Analysis at Nottingham Trent University, and a fellow of the London Consortium.

1. Passport to Peking: A Very British Mission to Mao's China.

Book Description Oxford University Press. Hardcover. Condition: New. Tells the story of the British politicians, scientists and artists who were invited by Chou En-lai to 'come and see' the New China in 1954. It is part travelogue, part political history, and part social comedy, and is based on a host of previously unpublished letters and diaries. The group included Clement Attlee; Nye Bevan; A.J. Ayer, the philosopher; artist-reporter Paul Hogarth; poet-novelist Rex Warner, a Marxist who had just married a Rothschild; J.D. Bernal; and Stanley Spencer. From OUP. Seller Inventory # 9780199541935

2. Passport to Peking: A Very British Mission to Maos China

Book Description Condition: New. Brand New Original US Edition.We Ship to PO BOX Address also. EXPEDITED shipping option also available for faster delivery.This item may ship fro the US or other locations in India depending on your location and availability. Seller Inventory # AUDECC-38477

5. Passport to Peking: A Very British Mission to Mao's China

7. Passport to Peking: A Very British Mission to Mao's China