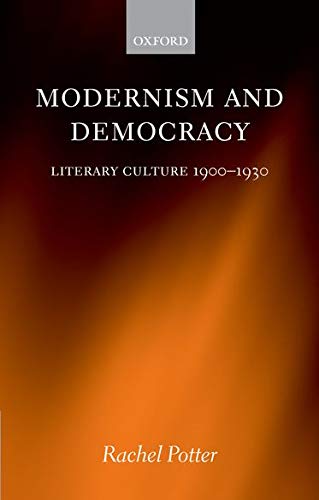 Anglo-American modernist writing and modern mass democratic states emerged at the same time, during the period of 1900-1930. Yet writers such as T. S. Eliot, W. B. Yeats, Ezra Pound, Wyndham Lewis, and Ford Madox Ford were notoriously hostile to modern democracies. They often defended, in contrast, anti-democratic forms of cultural authority. Since the late 1970s, however, our understanding of modernist culture has altered as previously marginalised writers, in particular women such as Gertrude Stein, Djuna Barnes, H.D., and Mina Loy, have been reassessed. Not only has the picture of Anglo-American modernist culture changed significantly, but the understanding of the relationship between modernist writing and politics has also shifted.

Rachel Potter here reassess the relationship between modernism and democracy by analysing the wide range of different reactions by modernist writers to the new democracies. She charts the changes in the ideas of democracy as a result of the shift from liberal to mass democracies after the First World War and of women's entrance into the political and cultural spheres. By uncovering hitherto-unanalysed essays by a number of feminist writers she argues that in fact there was a widespread scepticism about the consequences of mass democracy for women's liberation, and that this scepticism was central to the work of women modernist writers.

Book Description Hardback. Condition: Very Good. The book has been read, but is in excellent condition. Pages are intact and not marred by notes or highlighting. The spine remains undamaged. Seller Inventory # GOR012158000

Book Description Condition: Good. A+ Customer service! Satisfaction Guaranteed! Book is in Used-Good condition. Pages and cover are clean and intact. Used items may not include supplementary materials such as CDs or access codes. May show signs of minor shelf wear and contain limited notes and highlighting. Seller Inventory # 0199273936-2-4