Items related to The First Emperor: Selections from the Historical Records... 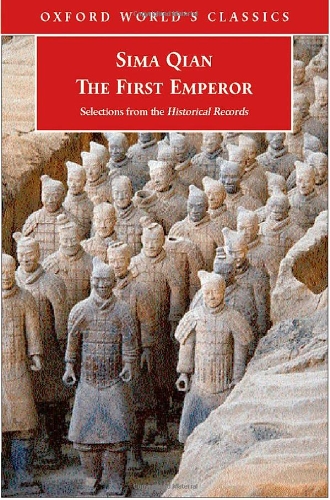 'The following year Qin unified all under Heaven and the title of August Emperor was immediately adopted.' The short-lived Qin dynasty unified China in 221 BC and created an imperial legacy that lasted until 1911. The extraordinary story of the First Emperor, founder of the dynasty, is told in the Historical Records of Sima Qian, the Grand Historiographer and the most famous Chinese historian. He describes the Emperor's birth and the assassination attempt on his life, as well as the political and often brutal events that led to the founding of the dynasty and its aftermath. Sima Qian recounts the building of the Great Wall, the 'burning of the books', and the construction of the First Emperor's magnificent tomb, a tomb now world famous since the discovery of the terracotta warriors in 1974. Sima Qian's love of anecdote ensures that his history is never dull, and Raymond Dawson's fluent translation captures his lively and vivid style. Chronicling recent archaeological developments and questioning Sima Qian's biases, K. E. Brashier's preface highlights the importance of the Grand Historiographer's account and Dawson's translation in the twenty-first century.

Its vast scope can guide you to places they never reach - such as third-century BC China, with imperial historian Sima Qian, (Boyd Tonkin, The Independent)

The late Raymond Dawson was Emeritus Fellow of Wadham College, Oxford and author of a number of publications on China, including Confucius and the OWC edition of Confucius' analects. K. E. Brashier is Associate Professor of Religion and Humanities at Reed College.