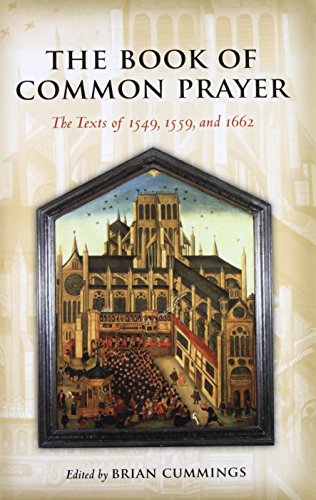 'In the midst of life we are in death'

The words of the Book of Common Prayer have permeated deep into the English language all over the world. For nearly 500 years, and for countless people, it has provided a background fanfare for a marriage or a funeral march at a burial. Yet this familiarity also hides a violent and controversial history. When it was first produced the Book of Common Prayer provoked riots and rebellion, and it was banned before being translated into a host of global languages and adopted as the basis for worship in the USA and elsewhere to the present day.

This edition presents the work in three different states: the first edition of 1549, which brought the Reformation into people's homes; the Elizabethan prayer book of 1559, familiar to Shakespeare and Milton; and the edition of 1662, which embodies the religious temper of the nation down to modern times. Far from being a book for the religious only, the Book of Common Prayer is one of the seminal texts of human experience and a manual of everyday ritual: a book to live, love, and die to.

Everything has been planned and executed faultlessly, from the massive undertaking of the editions themselves (for which Cummings consulted hundreds of copies of the Book of Common Prayer), right down to the details, like the glossary, and the enriching features, like the note on music. The result is a book that is at once accessible to a lay reader with little knowledge of the history of the Book of Common Prayer and stimulating to academics working in the fields of church history, book history, (Ruth Ahnert, Cambridge Quarterly)

This book is an exemplary text ... the reproduction of the three different prayer books is immaculate, and the introductory commentary is original and thought provoking. (Marcus Harmes, Parergon - Journal of the Australian and New Zealand Association for Medieval and Early Modern Studies)

Brian Cummings received his BA at Cambridge University, where he also took his PhD under the supervision of the poet Geoffrey Hill and the church historian Eamon Duffy. He was previously a Fellow of Trinity College, Cambridge before moving to Sussex. He was a British Academy Exchange Fellow at the Huntington Library, California, in 2007 and is currently a research professor holding a three-year Major Research Fellowship with the Leverhulme Trust (2009-12).