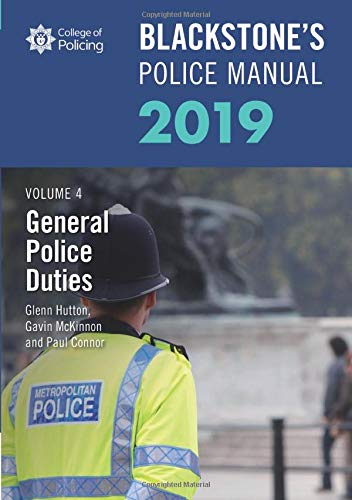 Blackstone's Police Manuals 2019, endorsed by the College of Policing, are the only official study guides for the NPPF Step Two Legal Examination (formerly OSPRE® Part I).Straightforward and accessible, Blackstone's Police Manuals are the only resource used by question writers when preparing a NPPF Step Two Legal Examination and each of the four volumes forms part of the only comprehensive version of the 2019 syllabus.

Blackstone's Police Manual Volume 4: General Police Duties 2019 covers areas including Terrorism and Associated Offences, Complaints and Misconduct, Weapons, and Public Disorder, as well as PACE Codes A, B, and G. For complex or commonly misunderstood areas, there are handy Keynote boxes, which point to relevant case law or provide an example of how material is used in a practical sense, helping you to establish the connections between legislation and police procedure. The 2019 edition has been updated to incorporate all recent legislative developments and case law, including coverage of the Policing and Crime Act 2017 and its wide-ranging effects, as well as the Data Protection Act 2018 and updates from the Investigatory Powers Act 2016, among others.

Glenn Hutton BA, MPhil, FCIPD is a Director of Psychometric Technology Limited which designs and publishes psychological tests and provides selection and assessment services. Formerly a Superintendent in North Yorkshire Police, he also worked as Head of NPT Examinations and Assessment, Head of Training in North Yorkshire and as both Course Director and Director of Studies at the Police Staff College, Bramshill. Gavin McKinnon LLB, LLM, MSt (Cantab), CMgr is the Head of Corporate Communications for Kent Police. Formerly a Chief Superintendent, he served with the National Policing Improvement Agency (now College of Policing) and the RUC/PSNI. He also worked as Deputy Director of Police Reform at the Home Office, and was Head of Crime & Justice for the think-tank Policy Exchange. Paul Connor Cert Ed (FE), PG Cert (ODE), LLB is a Police Training Consultant, teaching law to over 3,000 candidates since 2002. He is the author of the Blackstone's Crime Manual and the Consultant Editor for the Blackstone's Police Manuals. He is the co-author of Blackstone's Police Investigators' Manual, Blackstone's Police Investigators' Workbook and is the author of the Blackstone's Sergeants' and Inspectors' Mock Examination Paper.