Items related to Invisible Agents: Women and Espionage in Seventeenth-Century... 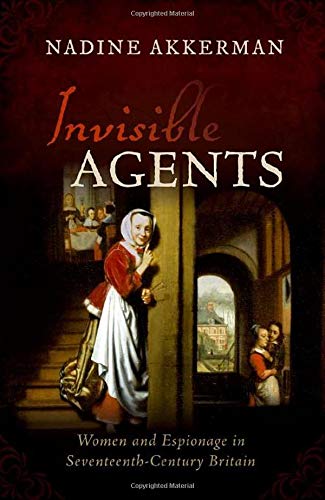 It would be easy for the modern reader to conclude that women had no place in the world of early modern espionage, with a few seventeenth-century women spies identified and then relegated to the footnotes of history. If even the espionage carried out by Susan Hyde, sister of Edward Hyde, Earl of Clarendon, during the turbulent decades of civil strife in Britain can escape the historiographer's gaze, then how many more like her lurk in the archives?

Nadine Akkerman's search for an answer to this question has led to the writing of Invisible Agents, the very first study to analyse the role of early modern women spies, demonstrating that the allegedly-male world of the spy was more than merely infiltrated by women. This compelling and ground-breaking contribution to the history of espionage details a series of case studies in which women ― from playwright to postmistress, from lady-in-waiting to laundry woman ― acted as spies, sourcing and passing on confidential information on account of political and religious convictions or to obtain money or power.

The struggle of the She-Intelligencers to construct credibility in their own time is mirrored in their invisibility in modern historiography. Akkerman has immersed herself in archives, libraries, and private collections, transcribing hundreds of letters, breaking cipher codes and their keys, studying invisible inks, and interpreting riddles, acting as a modern-day Spymistress to unearth plots and conspiracies that have long remained hidden by history.

A dense, hugely researched and admirably learned history of women spies during the Civil War. (Dominic Sandbrook, The Sunday Times)

A triumph of scholarly rigour, original thinking and crisp prose. It is, in every sense, a cracking book. (Jessie Childs, The Daily Telegraph)

Invisible Agents is a work of deep scholarship that suggests Akkerman would have made an excellent spy catcher. (Leanda de Lisle, The Times)

An intriguing book ... [Akkerman's] own remarkable ability to ferret out secrets is often as great as that of the spies she writes about. Time after time, women whose lives, careers and even names have been forgotten or misread spring into stealthy, double-dealing life on the page. (Adrian Tinniswood, Literary Review)

Invisible Agents breaks significant new ground in its focus on the special roles of Royalist and Parliamentarian 'she-intelligencers' and their hidden world. This is a model monograph, meticulously researched and relentlessly questioning, which succeeds admirably in uncovering closely guarded secrets. (R. C. Richardson, Times Higher Education)

Nadine Akkerman is Reader in early modern English Literature at Leiden University and Visiting Fellow at All Souls College, Oxford. She is author of the critically acclaimed Invisible Agents: Women and Espionage in Seventeenth-Century Britain (OUP), and of The Correspondence of Elizabeth Stuart, Queen of Bohemia (OUP), the third and final volume of which will be published in 2020, and is currently writing the definitive biography of Elizabeth Stuart. She has also published extensively on women's history, diplomacy, and masques, and curated several exhibitions, including the popular Courtly Rivals at the Haags Historisch Museum. In 2017 she was elected to The Young Academy of the Royal Netherlands Academy of Arts and Sciences, and received a Special Recognition Award from the World Cultural Council.