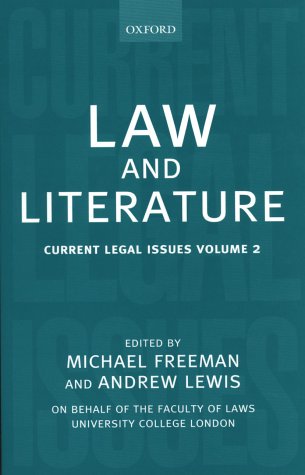 Law and Literature, the second volume in the Current Legal Issues series, is a comprehensive and provocative treatment of an exciting new area that will stimulate and enlighten anyone interested in law as it appears in literature. Future volumes will include such subjects such as law and medicine and law and religion.

Law is literature but it also appears frequently in literature. The trial itself has features in common with literature, and law and literature both require interpretation. Literature may be constrained by the law and the law of defamation or blasphemy as, for example, the Salman Rushdie affair so vividly illustrates. All of these wide-ranging topics of relating law to literature are explored in this state of the art volume written by leading thinkers from both sides of the Atlantic.

Texts analysed range from drama to novels to film and musical performance and interpretation to the Bible. Trials dissected include the Eichmann and M'Naughten cases and treason and witchcraft trials.

the contributors have staked out their own distinctive approaches. (Ray Cocks, Lawful Literature, Keele University.)

This is very much an international collection, with strong trans-atlantic representation. The contrasts between English and american approaches are particularly instructive. (Ray Cocks, Lawful Literature, Keele University.)

no review could do full justice to its variety of topic and approach. It is a fine collection. (Ray Cocks, Lawful Literature, Keele University.)