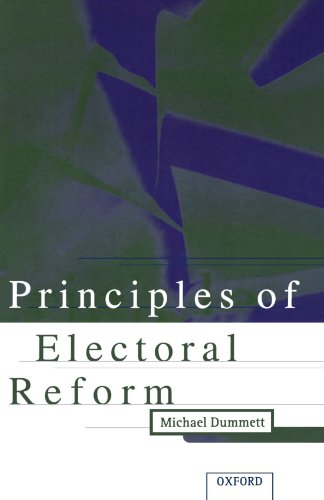 A country's electoral system has a profound effect on its politics; its citizens ought therefore to ask themselves at frequent intervals whether that currently in force is satisfactory. This book does not argue for a particular answer, but aims to help people think about the question. Few realize how much thought it needs. One should not begin by asking whether this or that system is better, but by trying to make precise what we want an electoral system to do. A general election has two effects: it decides the composition of Parliament; and it decides who is going to represent each constituency. The question of what we want an electoral system to do therefore splits in two: how should Parliament be divided between the parties, given the voter's preferences? and which are the most representative local candidates, given the voter's preferences? Neither question is straightforward, but this timely new book helps to explain on what basis we should decide which electoral system we should have.

Electoral reform is currently an extremely significant political issue in many countries, yet there is little real understanding or systematic discussion of it. In this timely and accessible new book, Professor Dummett, one of the most distinguished scholars in the field, analyzes the main forms of electoral systems used in legislative systems around the world, and generates a set of criteria that help to explain how we should decide which system we should have.

Elegant book ... The exposition is clear; quite complex arguments are expressed in terms available to a large number of intelligent voters without sacrifice of accuracy. He is not dogmatic; he expresses his preferences clearly but presents the arguments for different systems fairly and does not hesitate to point out difficulties with his preferred systems ... This book is to be strongly recommended to anyone with a serious interest in the major issue of electoral reform. (Times Higher Education Supplement)

Of interest to politicians and political scientists ... At a time when the future Scottish and Welsh assemblies are examining the best means for electing candidates, this clear exposition of bases for electoral reform provides a timely contribution to the debate. (Aslib Book Guide)