Items related to Dumbstruck - A Cultural History of Ventriloquism

Dumbstruck - A Cultural History of Ventriloquism 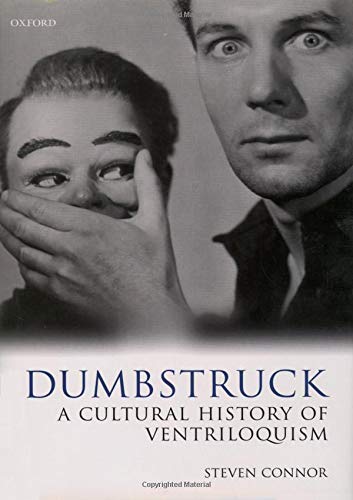 Why can none of us hear our own recorded voice without wincing? Why is the telephone still full of such spookiness and erotic possibility? Why does the metaphor of ventriloquism, the art of 'seeming to speak where one is not', speak so resonantly to our contemporary technological condition? These are the kind of questions which impel Steven Connor's wide-ranging, restlessly inquisitive history of ventriloquism and the disembodied voice. He tracks his subject from its first recorded beginnings in ancient Israel and Greece, through the fulminations of early Christian writers against the unholy (and, they believed, obscenely produced) practices of pagan divination, the aberrations of the voice in mysticism, witchcraft and possession, and the strange obsession with the vagrant figure of the ventriloquist, newly conceived as male rather than female, during the Enlightenment. He retrieves the stories of some of the most popular and versatile ventriloquists and polyphonists of the nineteenth century, and investigates the survival of ventriloquial delusions and desires in spiritualism and the 'vocalic uncanny' of technologies like telephone, radio, film, and internet. Learned but lucid, brimming with anecdote and insight, this is much more than an archaeology of one of the most regularly derided but tenaciously enduring of popular arts. It is also a series of virtuoso philosophical and psychological reflections on the problems and astonishments, the raptures and absurdities of the unhoused voice.

erudite and broad in scope. Its strength is the way it links cultural phenomena in new ways ... Connor gives us an intelligent study of a domain of skilful cultural creativity, against a background of several millennia of appalling irrational behaviour. (Raphael Salkie, Times Higher Education Supplement)

this incredibly erudite work ... is easily the best account of the dark business at the roots of the art ... a scholarly but wry style that is a pleasure to read. (Andrew Martin, New Statesman)

Steven Connor was educated at Christ's Hospital, Horsham and Wadham College, Oxford, and has taught at Birkbeck College, University of London since 1979, where he is currently Professor of Modern Literature and Theory.

1. Dumbstruck: A Cultural History of Ventriloquism

5. Dumbstruck: A Cultural History of Ventriloquism

6. Dumbstruck: A Cultural History of Ventriloquism

7. Dumbstruck: A Cultural History of Ventriloquism