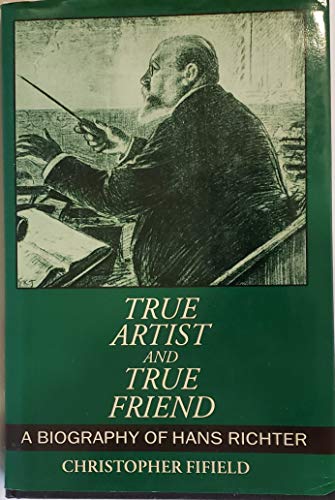 "True artist and true friend", thus Elgar saluted Hans Richter, the dedicatee of his "First Symphony" and the greatest conductor of his age. Richter was the first career-conductor to gain international fame and respect (before then conductors were invariably composers). During his career, which began in Budapest and ended over 40 years later in Manchester (where he was permanent conductor of the Halle Orchestra), he dominated the musical life of Vienna, London and Bayreuth, three of the most important musical centres of the 19th century. Few composers of the age were untouched by him: he gave first performances of works by Wagner (the "Ring"), Brahms (symphonies "2" and "3"), Elgar ("Enigma Variations", "The Dream of Gerontius", "First Symphony"), Bruckner, Dvorak, Tchaikovsky, Stanford and Parry; he assisted the careers of Sibelius, Bartok and Glazunov, as well as countless singers and instrumentalists. His energy drove him to travel on punishing schedules and conduct demanding programmes, all of which he recorded in his conducting books, containing details of the 4351 public performances he gave in his professional life. As is this wasn't enough, he was also a professional horn player, could play every instrument except the harp, and could sing to a standard which enabled him to deputize at short notice for the indisposed Kothner at an early performance of Wagner's "Die Meistersinger". This biography gives an insight into Hans Richter and the musical life of his age. It contains hitherto unpublished letters from a variety of musicians and composers, and an appendix, giving an analysis of his works, for instance - 97 performances of "Don Giovanni", 75 of Tchaikovsky's "Sixth Symphony". This volume is a portrait of the man who established the art and profession of the modern conductor.

About the Author: Christopher Fifield is a freelance writer living in Great Britain.

1. True Artist and True Friend: A Biography of Hans Richter

2. True Artist and True Friend: A Biography of Hans Richter

4. True Artist and True Friend: A Biography of Hans Richter