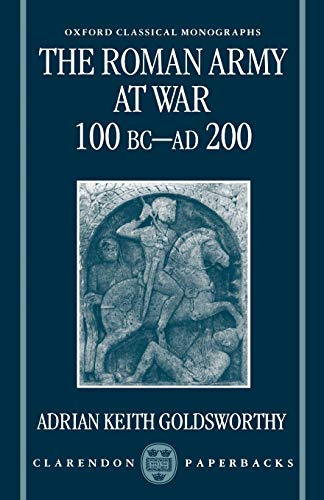 Goldsworthy examines how the Roman army operated on campaign and in battle. He compares the army's organization and strategic doctrine with those of its chief opponents and explores in detail the reality of battle: tactics, weaponry, leadership, and, most of all, the important issue of morale.

An examination of the way the Roman army operated during a war and how it fought a battle. The book explores the influence of the Roman army's campaign tactics on its organization, its flexibility, weaponry and leadership, concluding that it was able to adapt to any type of warfare.

Meticulously researched and well written, it addresses every aspect of the army as a fighting force. The Roman Army at War falls into that most welcome category of books with proper footnotes ... The whole package is wrapped up with a refreshingly comprehensive bibliography ... the work he has compiled will keep this reviewer quite satisfied for the foreseeable future. (Duncan B. Campbell, Britannia)

He has written a book about the realities of warfare in the early Empire and we should be truly grateful. (Hugh Elton, Trinity College, Hartford, CT, Journal of Roman Studies)

The book does what it sets out to do, namely, it emphasizes the inherent flexibility of the Roman legion. (Bryn Mawr Classical Review)

useful study ... the attempt to refocus the discussion of the Roman army along the lines of actual (and not idealized) warfare is welcome and largely successful. (Loren J. Samons II, Religious Studies Review)

Book Description Paperback. Condition: New. Revised ed. Language: English. Brand new Book. This detailed examination of the way in which the Roman army operated during a war and how it fought a battle breaks away from existing studies, which mostly concentrate on the army in peacetime, and attempts to understand the army as an institution whose ultimate purpose was to wage war. Adrian Goldsworthy explores the influence to the Roman army's organization on its behaviour during a campaign, emphasizing its great flexibility in comparison to most of itsopponents. He considers the factors determining the result of a conflict and proposes, contrary to orthodox opinion, that the Roman army was able to adapt successfully to any type of warfare. Following the technique pioneered by John Keegan in The Face of Battle (1976), Dr Goldsworthy builds up a precisepicture of what happened during battle: tactics employed, weaponry, leadership, behaviour of individuals as well as groups of soldiers, and, of utmost importance, morale. Seller Inventory # AAV9780198150909

Book Description Condition: NEW. 9780198150909 This listing is a new book, a title currently in-print which we order directly and immediately from the publisher. Print on Demand title, produced to the highest standard, and there would be a delay in dispatch of around 10 working days. For all enquiries, please contact Herb Tandree Philosophy Books directly - customer service is our primary goal. Seller Inventory # HTANDREE01579671