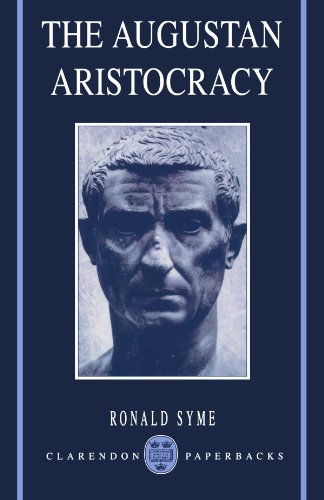 While the monarchy established by Caesar Augustus attracts assiduous study, not enough has been said about the old nobility renascent after years of civil war. One clear reason is the nature of the evidence, most of it sporadic or recondite. To be made intelligible, the theme demands constant recourse to better documented periods. The exposition has to range backward to the closing age of the Republic and forward to Nero's death. In fact, the best testimony to the Augustan aristocracy derives from the Annals of Tacitus. After splendour and success, evident notably in the second decade of the reign (on which this book is centred), the ancient houses went down in the embrace of the dynasty, itself from the outset an aristocratic nexus. Covering something like a century and a half in the history of Roman families, this book may be taken as a supplement no less than sequel to The Roman Revolution (OUP 1939) and to Tacitus (OUP 1958).

'Syme is masterful. His capacity to wring information about parentage, career, and office from the driest fragmentary inscription and marry it with other material is legendary.' The Times

'This is a book to incite wonder ... no general reader with the least enthusiasm for political history of any age could fail to find it compelling.' Times Literary Supplement

'This book belongs to the rarest of categories: books that one wishes were longer and whose end is approached with a grudging reluctance.' Sunday Telegraph

'Between the seemingly abrupt sentences runs a current of feeling generated by Syme's profound understanding of the ironies of political history.' Thomas D'Evelyn The Christian Science Monitor