Items related to Ashraf into Middle Classes: Muslims in Nineteenth-century... 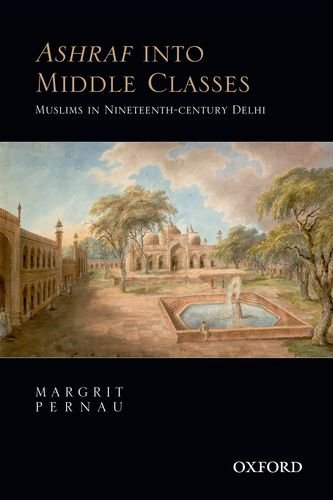 "This is an ambitious and sophisticated work of historical scholarship that engages with current debates on identity, community formation, religion, gender, communalism, and politics in nineteenth- and early twentieth-century South Asia."-H-Net

Book Description OUP India, India, 2013. Hardback. Condition: New. New. Language: English. Brand new Book. Nineteenth-century Delhi was marked by a curious mixture of political upheaval and cultural resurgence. Drawing on a wide variety of little-known sources in Urdu and Persian, apart from the more conventional British records, this book provides a revelatory and vivid narrative of Muslims in the period covering the British conquest in 1803 to the end of the Khilafat movement in 1922. Moving away from the tendency of studies on Muslims to focus on religious identity, this book allows us tohistoricize Islam and socially contextualize its many manifestations. Treating identities as inherently dynamic and ever changing, Pernau argues that religious identity became central for Muslims only in the last third of the nineteenth century, and this was closely linked with the creation of a middle class whose members described themselves as ashraf, or 'men from a good family'. The new concept of respectability or sharafat on which the middle class was based allowed it to, at once, draw a distance from the old nobility, bring the learnedsection of the community closer to the businessmen, and demarcate it sharply from the subalterns.The book focuses on the agency of historical actors-their perceptions and memories-to help us understand what it means to be a 'Muslim' as well as fathom the varied interactions between identities defined by religion, language, geography, and gender. In many ways, the book is itself a dialogue between Indian and European historiography, and will interest not just academics but also 'Delhi and Urdu lovers'. Seller Inventory # BZE9780198092285