Items related to The Life of Muhammad

I. Ishaq The Life of Muhammad

The Life of Muhammad 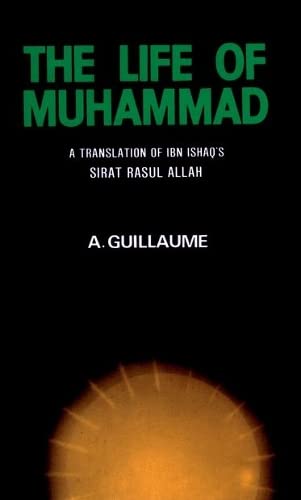 Professor Guillaume's translation of the Sira of Ibn Ishaq is now reissued. The translator used Ibn Hisham's abridgement and also included many additions and variants found in the writings of early authors. The book thus presents in English practically all that is known of the life of the Prophet. In the introduction, the translator discusses the character of the Sira in the light of the opinion of early Arabian scholars, noting especially the difficulties of the poetry. As the earliest monument of Arabian prose literature, the Sira remains a work of the first importance.

Hard read indeed. Very long and detailed. This book can BE VERY DRY but it is well worth the read. You simply cannot read the Quran nor the hadiths without this book. The Quran's referencial (to the Bible, or rather, Gnostic versions of the Bible), out of context statements can be confusing without lengthy Quranic commentary footnotes or the hadiths. The hadiths (Bukhari and Muslim being the best) are the greatest sources of explaining the Quran and the Sunna, but they fail like the Quran in having any coherent chronological order. Thus enter: THE LIFE OF MUHAMMAD! This is chronological of all the events recorded in relation to Muhammad. These events include his early years of universal proclamations of peace to his later years of unsettling sex slavery and jihad. Was he possessed as a child? When did the Spirit visit him in Hira? How was Muhammad treated by the Quraish? When did jihad enter in Muhammad's life? When did the revelations pertaining to the formations of the Islamic state descend from "Heaven"? How old was Aisha, Muhammad's child bride? How many slaves did he set free? How many did he enslave? How many concubines and wives did he have? How many battles did he participate or direct? How many assassinations did he order against poets? The Satanic verses controversy? --By Joshua on 8 August 2016

If you dare to know who Muhammad really was and the truth of how Islams perfect man and how he and his followers brutally took over Byzantium, Persia and most importantly how he overcame all his desert tribesmen especially his hatred, hostility and brutal extermination and genocide of his kindred Jewish tribes, this is the book for you to read and digest. After reading this book you will understand the violence and hostility between Muslims and Islams aggressive hostility to most of the rest of the world waiting to be conquered for Allah. --By A customer on 18 september 2016

This book was enthralling, sometimes things got a bit slow but in reading even just for fun there is a lot in here to serve that purpose. However the book is, of course, more than that: as one of the earliest records of Muhammad's life it is a precious historical resource --By Simon on 19 september 2016

Alfred Guillaume (1888 1966) was Professor of Arabic and Head of the Department of the Near and Middle East in the SOAS, University of London, UK.

1. The Life of Muhammad