Items related to Bangsawan: Social and Stylistic History of Popular... 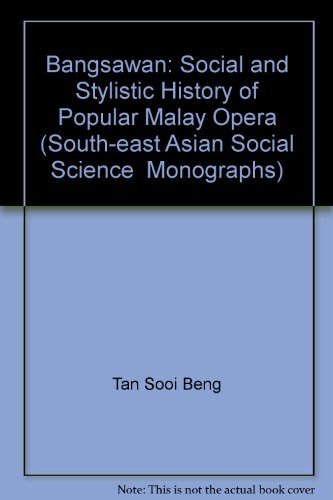 "Bedside companion for a week, coffee-table adornment for a month, and for ever a place on the shelves from which it can be easily and quickly retrieved: that should be the lot of this uncommonly handsome production with its 400 years of history to recount...and its scholarship and thoughtfulness which are both scrupulous and engaging."--Id

This study of bangsawan traces the stylistic changes in its theatrical form from the late 19th century to the 1980s and links these changes to the socio-political transformations prevalent in Malaysian society.

2. Bangsawan : A Social and Stylistic History of Popular Malay Opera

Book Description Condition: Good. Former Library book. Shows some signs of wear, and may have some markings on the inside. Seller Inventory # 18146751-6

Book Description Oxford University Press, 1992. Condition: Good. This is an ex-library book and may have the usual library/used-book markings inside.This book has hardback covers. In good all round condition. Dust Jacket in fair condition. Seller Inventory # 7001434