Items related to The Colonial Policy of British Imperialism (Oxford... 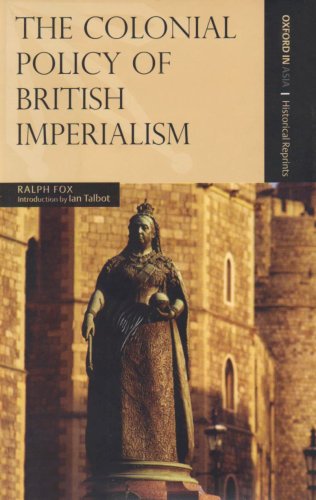 This book was written in the dying years of the Raj in India and elsewhere. It seeks to explain, from the common person's point of view, what the empire is, how it was created, how it ruled, and the condition of its people. At the time of writing, Britain was hit hard by the Depression and among the questions raised daily in the country were issues of British naval supremacy, empire trade and 'imperial self-sufficiency'. Ralph Fox argued that British capitalism based on imperial monopoly was in crisis (at the time of writing (1933)). He also argued that the question of socialism in Britain was determined by the exploitation of the colonial peoples. There was therefore an intimate connection between national liberation of the peoples of the Empire and the struggle of the British working class. This book remains important in any intellectual historical understanding of theories of Empire. It reflects the understanding of the British Empire and its manifestations primarily in India, and elsewhere, from the intellectual framework of socialism. Its value lies in the insight it provides into this type of understanding at the time it was written.

Ralph Winston Fox. (Halifax, United Kingdom, March 30, 1900 - December 27? 1936). Novelist, social historian, journalist, translator and politician. Studied modern languages at Oxford University, identified himself with socialist and communist political movements after a visit to the Soviet Union in 1920, where he saw the effects of the Russian Revolution of 1917 for himself. Was one of the founders of the Communist Party of Great Britain. In 1936, in order to fight in the Spanish Civil War, he joined the International Brigades through the French Communist Party in Paris. When he arrived in Spain at the end of the year, he was sent to be trained in Albacete and was assigned to the XIV Brigade. He was immediately taken to the front in the first operations in which the Brigades were involved, and he died in the province of Jaén in December, 1936, though some biographies give January 1937, the date when his death was made public.