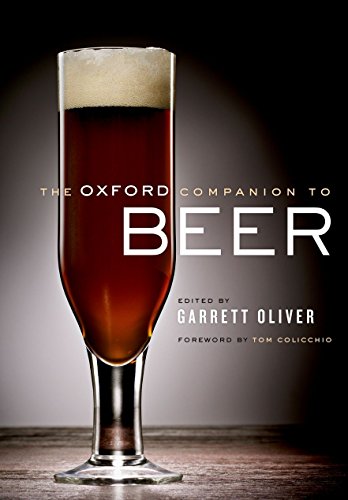 a useful reference, and a source of serendipitious pleasure (Engineering and Technology)

This book contains everything you might want to know about the world's most popular drink. (The Field)

epic...blockbuster that would satisfy any hardcore enthusiast. It's edited by Brooklyn Brewery's ridiculously talented brewmaster Garrett Oliver, a man who writes as well as he brews. Which is annoyingly well. (The Guardian)

anyone with more than a passing interest in malt and hops should find something to interest them between the pages of this hefty book. (The Independent)

Garrett Oliver is the Brewmaster of the Brooklyn Brewery and author of The Brewmaster's Table: Discovering the Pleasures of Real Beer with Real Food (HarperCollins, 2003). He has won many awards for his beers, is a frequent judge for international beer competitions, and has made numerous radio and television appearances as a spokesperson for craft brewing.

1. The Oxford Companion to Beer (Hardback)

2. The Oxford Companion to Beer

3. The Oxford Companion to Beer

4. The Oxford Companion to Beer

7. The Oxford Companion to Beer

8. The Oxford Companion to Beer

Book Description Oxford University Press Inc, 2011. Condition: New. 2011. 1st Edition. Hardcover. The Oxford Companion to Beer is an unprecedented reference work that explores every aspect of beer, from its history and development throughout the world to the process by which it is created. Filled with fascinating facts and anecdotes, this is a pioneering, comprehensive, and thoroughly entertaining book. Editor(s): Oliver, Brewmaster Garrett (Brooklyn Brewery). Num Pages: 960 pages, 140 illustrations. BIC Classification: GBC; WBXD2. Category: (G) General (US: Trade). Dimension: 259 x 189 x 49. Weight in Grams: 1724. . . . . . Seller Inventory # V9780195367133

9. The Oxford Companion to Beer (Hardcover)

Book Description Hardcover. Condition: New. Hardcover. For millennia, beer has been a favorite beverage in cultures across the globe. After water and tea, it is the most popular drink in the world, and it is at the center of a $450 billion ind.Shipping may be from multiple locations in the US or from the UK, depending on stock availability. 920 pages. 1.750. Seller Inventory # 9780195367133