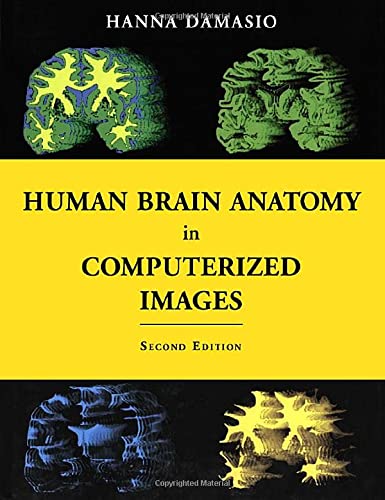 In Dr. Damasio's thoroughly revised second edition of her book, she enhances the understanding of common principles of gross brain organization. It provides users with confidence in their ability to identify focal regions of cerebral cortex on computerized scans, and leads them through the intricacies of the relationship of gross morphology to Brodmann architecture. This outstanding atlas thus facilitates further detailed exploration of the functional attributes of the cerebral cortical structures so carefully analyzed throughout the work. (Doody's Journal)

Modern tomographic scans are revealing the structure of the human brain in unprecedented detail. This spectator progress, however, poses a critical problem for neuroscientists and practitioners of brain-related professions: how to find their way in the current tomographic images so as to identify a particular brain site, be it normal or damaged by disease? The problem is made all the more difficult by the large degree of individual neuroanatomical variation. Prepared by a leading expert in advanced brain-imaging techniques, this unique atlas is a guide to the localization of brain structures that illustrates the wide range of neuranatomical variation. It is based on the analysis of 29 normal brain obtained from three-dimensional reconstructions of magnetic resonance scans of living persons. It also provides 177 sections (coronal, axial, and parasagital) of one of those brains so that the same structure presented in the section obtained in one incidence can be identified in the section of another incidence.

An additional 209 sections of two incidences of two other brains with different overall configurations are included at the same incidences, so that readers can become familiar with the variability of standard images prompted by different skull shapes. Forty-six normal brains, segmented in to the major lobes, are also included. The atlas is based on a voxel-rendering technique developed in the author's laboratory that permits the reconstruction of the brain in three dimensions. The technique permits the identification of major sulci and gyri with about the same degree of precision that can be achieved at the autopsy table. The volume contains 50 pages of colour illustrations. The second edition of this atlas offers entirely new images, all from new brain specimens. Like the first edition, it will prove to be an essential tool for neurologists, neurosurgeons, neuroradiologists, psychiatrists, and neuroscientists, as well as medical and neuroscience students.