Items related to Before European Hegemony: The World System A.D.1250-1350 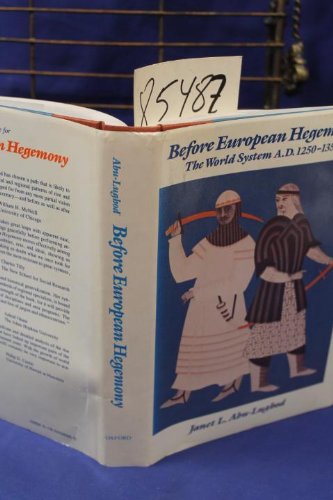 In this portrait of world trade before the age of European Hegemony, Janet Abu-Lughod examines global commercial connections among a large number of cities between the years 1250 and 1350. The work offers a reinterpretation of global economic evolution, arguing that the European world system of the sixteenth century had its origins in an earlier system dominated by Middle Eastern,Indian, and Chinese trade. In the thirteenth century, the Middle East emerged as a geographic fulcrum in which the economic potential of West and East were roughly balanced. Abu-Lughod argues that there was no inherent historical necessity shifting the system in favour of the West or preventing eastern societies from becoming the progenitors of a modern world system. To support her thesis, she explores the gradual articulation of the thirteenth century's incipient world system, its slow demise in the early to mid-fourteenth century and the reticulation of its fragments into an emerging European world system in the 1500s.

'Abu-Lughod's humanity is evident throughout this work as she describes in personalized yet dignifying prose the variety and commonalty of cultures acorss space and time. This book is both a gem and a landmark study.'Philip McMichael, Cornell University, Theory and Society, 22, 1993