Items related to The Complete Notebooks 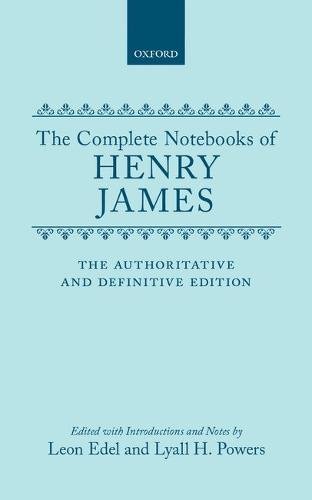 James's biographer and a leading James scholar provide the definitive edition of the writer's notebooks, which were discovered among his papers by Edel in 1937. Of the material here assembled, much was previously unpublished, including pocket diaries and dictated notes.

About the Editors:
Leon Edel is the author of Life of Henry James which received numerous awards, including the Pulitzer Prize, the National Book Award, and the Gold Medal of the American Institute of Arts and Letters.
Lyall H. Powers is Professor of English Language & Literature at the University of Michigan and is author and editor of several critical studies of Henry James.

1. The Complete Notebooks of Henry James: The Authoritative and Definitive Edition

2. The Complete Notebooks of Henry James: The Authoritative and Definitive Edition

4. The Complete Notebooks of Henry James: The Authoritative and Definitive Edition