Items related to A second volume of ten songs

A second volume of ten songs

A second volume of ten songs 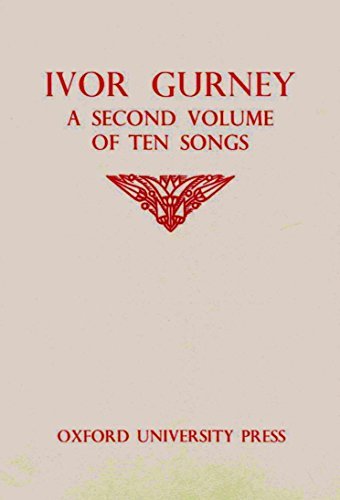 Contents: The scribe / W. de la Mare -- The boat is chafing / J. Davidson -- Bread and cherries / W. de la Mare -- An epitaph / W. de la Mare -- Blaweary / W. Gibson -- A sword / R. Flower -- The folly of being comforted / W.B. Yeats -- Hawk and buckle / J. Doyle -- Last hours / J. Freeman -- Epitaph in an old mode / J.C. Squire. English composer, organist, and poet Ivor Gurney (1890-1937) studied with Herbert Brewer at Gloucester Cathedral (1906-11) before gaining an open scholarship in composition to study with Stanford at the Royal College of Music in 1911. He joined the army in 1915, serving in France and Belgium until he was wounded and gassed at Passchendaele in 1917. After discharge he returned to the RCM to study with Vaughan Williams. He left in 1921 but was unable to find employment. Serious deterioration in his mental condition led to his admission to a mental hospital, where he died of tuberculosis. A songwriter of rare distinction (and a poet of considerable ability), who looked more to the German lied tradition than to the folksong manner then becoming popular, he showed early promise in his thoroughly 'English' Five Elizabethan Songs (1912); the songs written in the trenches-for example In Flanders and By a Bierside-possess an extraordinary haunting power. But perhaps his finest works date from the period 1919-22, notably the two Housman cycles for voice and piano quintet, Ludlow and Teme and The Western Playland (both 1919).