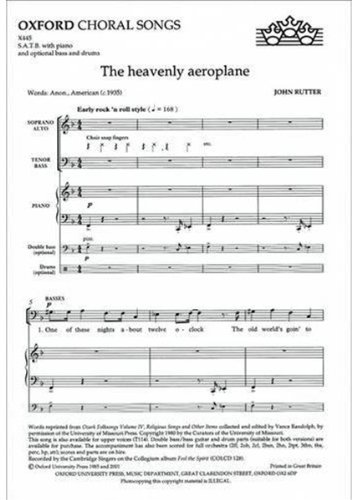 An easy rock and roll style setting. Orchestral material is available on hire.

The Heavenly Aeroplane is full of Rutter's joie de vivre and can be performed with piano or with double bass/bass guitar and drums, or even with a full orchestra - parts are on hire from OUP. There are few musical difficulties but clearly the choir must enter the rock 'n' roll spirit and be prepared to snap their fingers to the beat. (Music Teacher Feb 2003)

John Rutter was born in London in 1945 and studied music at Clare College, Cambridge. His compositions embrace choral, orchestral, and instrumental music, and he has edited or co-edited various choral anthologies, including four Carols for Choirs volumes with Sir David Willcocks and the Oxford Choral Classics series. From 1975 to 1979 he was Director of Music at Clare College, and in 1981 he formed his own choir, the Cambridge Singers. He now divides his time between composition and conducting and is sought after as a guest conductor for the world's leading choirs and orchestras.