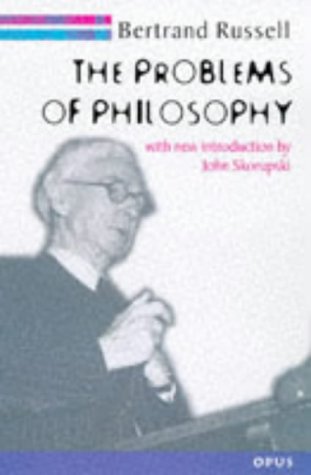 "Is there any knowledge in the world which is so certain that no reasonable man could doubt it?". Philosophy is the attempt to answer such ultimate questions, not carelessly and dogmatically, as we might deal with them in ordinary life, but critically, after analyzing how and why the questions arise in the first place and clarifying the assumptions and concepts on which they are based. This work, originally published in 1912, is an introduction to the theory of philosophical enquiry. It gives Russell's views on such subjects as the distinction between appearance and reality, the existence and nature of matter, idealism, knowledge by acquaintance and by description, induction, truth and falsehood, the distinction between knowledge, error and probable opinion, and the limits and value of philosophical knowledge. This new edition includes an introduction by John Skorupski contextualizing Russell's work, and a guide to further reading.

"Treats its subject in a way that will arouse the interest of any one who has any latent ability to become interested in it."--The New York Times

Book Description Paperback. Condition: Very Good. The book has been read, but is in excellent condition. Pages are intact and not marred by notes or highlighting. The spine remains undamaged. Seller Inventory # GOR003927579

Book Description Paperback. Condition: Fair. A readable copy of the book which may include some defects such as highlighting and notes. Cover and pages may be creased and show discolouration. Seller Inventory # GOR004824196