Items related to The Ages of Gaia: A Biography of Our Living Earth

Lovelock, James The Ages of Gaia: A Biography of Our Living Earth

The Ages of Gaia: A Biography of Our Living Earth 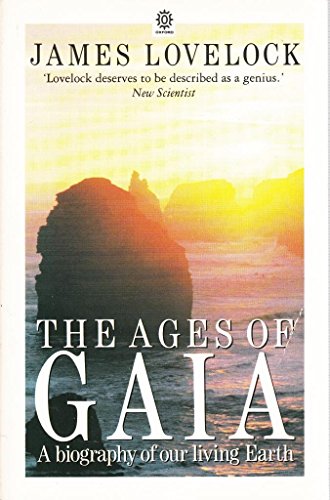 BBC 2's 1986 "Horizon" programme won many new followers for Jim Lovelock's startling new theory of life called Gaia. Existing theories held that plants and animals evolve on, but are distinct from, an inanimate planet. Gaia, however, showed that the Earth, its rocks, oceans, and atmosphere, and all living things are part of one great organism, evolving together over the vast span of geological time. Since the appearance of his first book, Gaia: A New Look at Life on Earth , Jim Lovelock's theory has been confirmed by much scientific work. In this new book he elaborates on a new and unified view of the Earth and life sciences, and discusses recent developments in some detail: the greenhouse effect, acid rain, the depletion of the ozone layer and the effects of ultra-violet radiation, the emission of CFCs, and nuclear power. Using the imaginary planet Daisyworld as a model, he demonstrates the geophysical interaction of atmosphere, oceans, climate, and the Earth's crust, regulated for comfortable life by living organisms using the energy of the sun. Yet Gaia is not always the benign life-force many people have taken her to be: it is the health of the planet that matters, not the welfare of some individual species of organisms. This is where Gaia and the environmental movements concerned with the health of people part company. This assertion raises profound philosophical and religious questions which Lovelock tackles in a chapter on 'God and Gaia'. 'In Gaia we are just another species, neither the owners nor the stewards of this planet. Our future depends much more upon a right relationship with Gaia than with the never-ending drama of human interest.' `Open the cover and breathe in great draughts of fresh air that excitingly argue the case that "the earth is alive".' Observer General, environmentalists, anyone interested in earth sciences, theories of evolution, readers of Richard Dawkins.

This book describes a set of observations about the life of our planet which may, one day, be recognized as one of the major discontinuities in human thought. If Lovelock turns out to be as right in his view of things as I believe he is, we will be viewing the Earth as a coherent system of life, self-regulating and self-changing, a sort of immense living organism.--Lewis Thomas

1. The Ages of Gaia [Paperback]