Items related to Facing the Ocean: The Atlantic and Its Peoples, 8000... 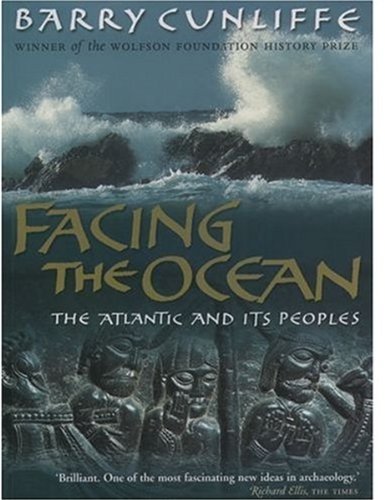 In this highly illustrated book Barry Cunliffe focuses on the western rim of Europe--the Atlantic facade--an area stretching from the Straits of Gibraltar to the Isles of Shetland.We are shown how original and inventive the communities were, and how they maintained their own distinctive identities often over long spans of time. Covering the period from the Mesolithic hunter-gatherers, c. 8000 BC, to the voyages of discovery c. AD 1500, he uses this last half millennium more as a well-studied test case to help the reader better understand what went before. The beautiful illustrations show how this picturesque part of Europe has many striking physical similarities. Old hard rocks confront the ocean creating promontories and capes familiar to sailors throughout the millennia. Land's End, Finistere, Finisterra--until the end of the fifteenth century this was where the world ended in a turmoil of ocean beyond which there was nothing. To the people who lived in these remote places the sea was their means of communication and those occupying similar locations were their neighbours. The communities frequently developed distinctive characteristics intensifying aspects of their culture the more clearly to distinguish themselves from their in-land neighbours. But there is an added level of interest here in that the sea provided a vital link with neighbouring remote-place communities encouraging a commonality of interest and allegiances. Even today the Bretons see themselves as distinct from the French but refer to the Irish, Welsh, and Galicians as their brothers and cousins. Archaeological evidence from the prehistoric period amply demonstrates the bonds which developed and intensified between these isolated communities and helped to maintain a shared but distinctive Atlantic identity.