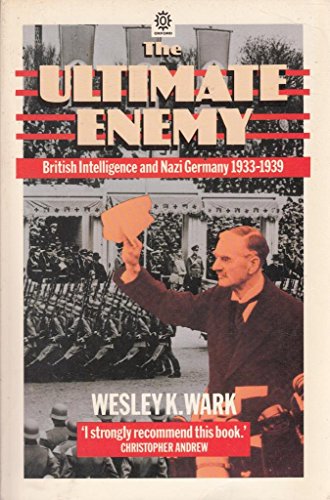 In this book, Wesley Wark examines the British military and political responses to Nazi Germany's rapid rearmament, and shows how faulty intelligence let Whitehall to adopt the ill-fated policy of appeasment. Chosen by Zara Steiner in the Financial Times as book of the year.

"The Ultimate Enemy is quite indispensable reading for any understanding of British policy in the six years before the Second World War."―International History Review

"An incisive study of how the British government machine became aware of the size and nature of the threat from Hitler's Germany that lead to war in September 1939."―Albion

"A thoroughly researched, powerful, and important study about the role of intelligence in British rearmament and diplomatic policy during the 1930s. The tale Wark tells is a depressing but familiar one. The intelligence community in London was divided by bureaucratic frontiers and its vision distorted by its own preconceptions. Crucial policymakers, such as Neville Chamberlain, used intelligence merely to buttress their own preconceived notions, discarding whatever was inconvenient. British intelligence agencies first badly underestimated German rearmament, then wildly overestimated it; on the eve of war, the British swung about again and decided, largely as a matter of faith, that they would win. All the ingredients of classic intelligence failures are described in Wark's account, which concludes that intelligence, even when accurate, will rarely defeat the tendency to believe what one wants to believe."―Choice

"The Ultimate Enemy is unusually rich in its contents and will certainly become essential reading for those interested in British appeasement policies. But Wark's reading of the major intelligence failures of this period has a wider applicability."―Times Literary Supplement

"A first-rate study on the role of intelligence assessments in Britain's foreign and defense policies during the 1930s. By examining a mass of unpublished material in archival collections, Wark has skillfully reconstructed the intelligence pictures presented to British decision makers on German rearmament and intentions."―Orbis

"This work is a penetrating analysis of the role of British intelligence services in assessing the threat posed by Hitler's Third Reich during the 1930s, and the accuracy of their evaluations of Germany's aims and capabilities."―Cryptologia

"The Ultimate Enemy is clearly, often cleverly and brilliantly, written. It has wit and panache. And, most of all, the author brings a massive intelligence and industry to bear on one of the most important topics of interwar history."―Paul M. Kennedy, Yale University

"Wesley K. Wark provides a very lucid and interesting analysis of the problems of intelligence assessment and points to some of the preconceptions that prevented Whitehall from better understanding Nazi Germany's strength. This is a clear, original, and convincing study of a new and important topic."―Christopher Andrew, University of Cambridge About the Author:

Wesley K. Wark is Associate Professor of History at the University of Toronto.

Book Description Oxford Paperbacks, 1986. Paperback. Condition: Good. All orders are dispatched the following working day from our UK warehouse. Established in 2004, we have over 500,000 books in stock. No quibble refund if not completely satisfied. Seller Inventory # mon0003930516

Book Description Oxford Univ Pr 1986-09-01, 1986. Paperback. Condition: Good. Item is in good condition. Some moderate creases and wear. This item may not come with CDs or additional parts including access codes for textbooks. Might be an ex-library copy and contain writing/highlighting. Photos are stock pictures and not of the actual item. Seller Inventory # DS-0192851764-3