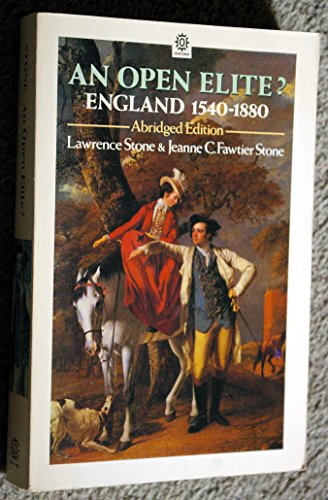 Covering a period of three and a half centuries between two great upheavals in landed society--the Dissolution of the Monasteries and the Agricultural Depression--this highly-acclaimed study examines the traditional view that for centuries English landed society has been open to infiltration by families made newly rich through trade, office, or the professions. The Stones focus on the landed elite of Hertfordshire, Northamptonshire, and the Northumberland counties, combining case histories and examples with in-depth research to test the historical validity of one of the most cherished beliefs about English society, economics, and politics. For this abridged edition, the authors have retained the essential contents of the original hardcover while omitting the supporting scholarly aparatus.

The most important, exciting, and original book on the English landed elite to have appeared since The Crisis of Aristocracy. There can be no higher praise than that. (David Cannadine, New York Review of Books)

Until his retirement Director of Shelby Cullom David Center for Historical Studies at Princeton University, Lawrence Stone remains one of the best-known historians in the world. For OUP he is the author of the trilogy Road to Divorce (1990, OPB 1995) Uncertain Unions (1992, OPB 1995) and Broken Lives (1993, OPB 1995) and also The Crisis of Aristocracy (1965, pb 1967)