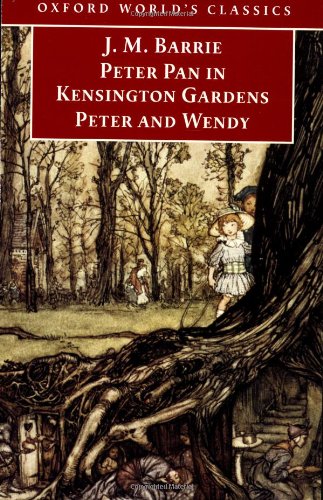 Peter Pan, the boy who refused to grow up, is one of the immortals of children's literature. J. M. Barrie first created Peter Pan as a baby, living in secret with the birds and fairies in the middle of London, but as the children for whom he invented the stories grew older, so too did Peter, reappearing in Neverland, where he was aided in his epic battles with Red Indians and pirates by the motherly and resourceful Wendy Darling. With their contrary lures of home and escape, childhood and maturity, safety and high adventure, these unforgettable tales are equally popular with children and adults.

'This charming little book...one of the most intiguing pieces of literature ever produced for children' --Carousel

Sir James Matthew Barrie (1860 - 1937) was a Scottish novelist and playwright, best remembered today as the creator of Peter Pan. He was born and educated in Scotland but moved to London, where he wrote a number of successful novels and plays. There he met the Llewelyn Davies boys, who inspired him to write about a baby boy who has magical adventures in Kensington Gardens (included in The Little White Bird), then to write Peter Pan, or The Boy Who Wouldn't Grow Up, a "fairy play" about an ageless boy and an ordinary girl named Wendy who have adventures in the fantasy setting of Neverland. --Wikipedia