Items related to The Newcomes: Memoirs of a Most Respectable Family...

Thackeray, William Makepeace The Newcomes: Memoirs of a Most Respectable Family (World's Classics)

The Newcomes: Memoirs of a Most Respectable Family (World's Classics) 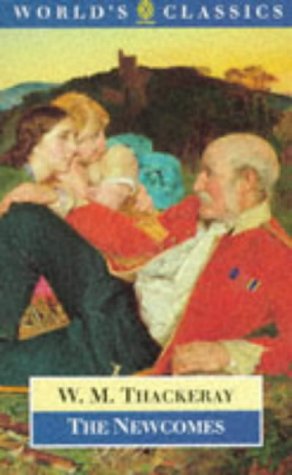 The Newcomes is Thackeray's most essentially 'Victorian' novel, generous in its proportions, sharp in its criticism of the moral convolutions of the age, and encyclopaedic in its reference. Set in the 1830s and 1840s, a period of rapid change and of political and economic development, the novel considers the fortunes and misfortunes of a 'most respectable' extended middle-class family. The action moves from London to Brighton, from England to France, from the political ambitions of an older generation in the industrial North to the painterly pretensions of a younger generation in Italy. At its centre is Thomas Newcome, a retired Colonel in the Indian Army who finds the snobberies and hypocrisies of early Victorian England disconcerting. In a world of men on the make, of social mobility, and of the buying and selling of women in an aristocratic marriage market, it is the Colonel's distinctive but old-fashioned gentlemanliness that stands out from a self-seeking society. The most observant and witty among Thackeray's studies of his culture, The Newcomes is also among his most complex and allusive novels, and this edition provides particularly detailed notes which clarify his many references.

William Makepeace Thackeray was a nineteenth century English novelist who was most famous for his classic novel, Vanity Fair, a satirical portrait of English society. With an early career as a satirist and parodist, Thackeray shared a fondness for roguish characters that is evident in his early works such as Vanity Fair, The Luck of Barry Lyndon, and Catherine, and was ranked second only to Charles Dickens during the height of his career. In his later work, Thackeray transitioned from the satirical tone for which he was known to a more traditional Victorian narrative, the most notable of which is The History of Henry Esmond. Thackeray died in 1863.

1. The Newcomes: Memoirs of a Most Respectable Family (The World's Classics)

2. The Newcomes: Memoirs of a Most Respectable Family (The World's Classics)