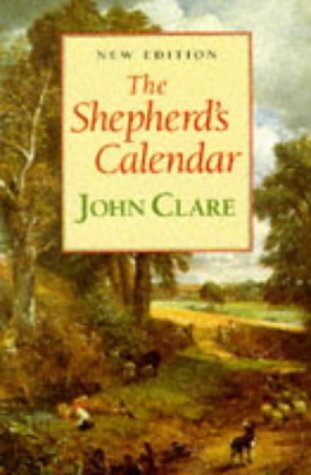 The poet, John Clare, who lived from 1793-1864, was the son of a Northamptonshire labourer and himself at various times a herd boy, militiaman, vagrant and unsuccessful farmer. He writes of the countryside and of village life with the special intensity of one who knows the land and its people intimately. "The Shepherd's Claendar", his most ambitious single poem, is both a classic of English poetry and a piece of social history, representing a statement about English country life from the point of view of its most silent representative - the agricultural labourer. To the modern reader "The Shepherd's Calendar" should be of interest because of the accuracy of its portrayal of natural life inthe different months of the year. It evokes natural life, using popular language, often derived from folk-songs and ballads. The book provides a sort of almanack of country life, detailing the tasks to be performed in each month of the year: ploughing in February, lambing in March, weeding in May, hay-making in June and so on. It also describes the flowers, the birds and the beasts to be found in hedgerow and field. It celebrates the festivals of the year - May Day games, shee-shearing feasts, Harvest Home and Christmas. As such, it will appeal to anyone who knows anything about nature in Britain or about farming life. This new edition of the text corrects numerous earlier misreadings as well as supplying substantial changes to "July" and "October". there is also a new introduction detailing the continuing importance of the poem to modern readers.

John Clare (1793-1864): Born the son of a thresher at Helpston, Northamptonshire, John Clare is a rural poet and story teller. He is a poet of spiritual originality, as compelling at his best as Crabbe and Wordsworth as a story teller in verse. He was an assiduous practitioner of the sonnet form at all periods of his poetic career. The sonnets he produced in the last few years before his institutionalisation in 1837, first at High Beech and then in Northampton General Asylum, are of particular interest, since he exploited the inherent brevity of the form to express a simultaneous precision of observation and starkness of vision that he rarely achieved either before or after.

Book Description Hardcover. Condition: Used; Good. **Simply Brit** Shipped with Premium postal service within 24 hours from the UK with impressive delivery time. We have dispatched from our book depository; items of good condition to over ten million satisfied customers worldwide. We are committed to providing you with reliable and efficient service at all times. Seller Inventory # 1580337

Book Description Paperback. Condition: Fair. A readable copy of the book which may include some defects such as highlighting and notes. Cover and pages may be creased and show discolouration. Seller Inventory # GOR006096382

Book Description Condition: Good. A+ Customer service! Satisfaction Guaranteed! Book is in Used-Good condition. Pages and cover are clean and intact. Used items may not include supplementary materials such as CDs or access codes. May show signs of minor shelf wear and contain limited notes and highlighting. Seller Inventory # 0192831542-2-4

Book Description Paperback. Condition: Very Good. The book has been read, but is in excellent condition. Pages are intact and not marred by notes or highlighting. The spine remains undamaged. Seller Inventory # CIN001326405