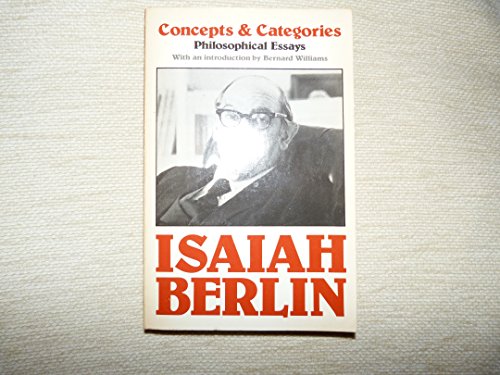 Although Isaiah Berlin liked to say that he left philosophy for the history of ideas after the Second World War, there is a decided continuity between his more purely philosophical writings, most of which are collected in this volume, and the more historical work for which he is better known.

Included here are Berlin's early arguments against logical positivism and later essays which more evidently reflect his life-long interest in political theory, intellectual history and the philosophy of history.

In two related pieces he gives his view on the philosopher's task, to uncover the various models - the concepts and categories - that we bring to our experience, and that help to form it. In his own words 'The goal of philosophy is always the same, to assist men to understand themselves and thus operate in the open, and not wildly, in the dark.'

This collection of eight essays spans the range of Isaiah Berlin's interests, including his role in the disputes of language philosophers in the 1930s, his interest in political philosophy and his later attention to the history of ideas. In Berlin's preface to this collection he records his decision to abandon philosophy for history in the 1940s, but by his own definition of philosophy, given in the first essay "The Purpose of Philosophy", he continued to be a philosopher par excellence, radically questioning the models, or categories, by which human beings understand their world. Berlin sees this as the perennial task of the philosopher, which he recognises as "agonising and thankless" and one he takes up in this collection with analyses of "Verification" and "Equality".

It is doubtful now whether Berlin's view of philosophy would be taken as an exhaustive account of the enterprise, especially with the flourishing in the last 25 years of applied ethics and political philosophy, and it seems reasonable to suppose that philosophy will continue to involve speculative work about the proper ends of human life, as well as logical analysis. Berlin's paradoxical contribution, evident in this collection, was that in committing himself to a life of radical questioning of concepts and categories, he in fact proposed a purpose for life, namely the creation of a society that would not be duped by incoherent and idealistic models of the world. Radical philosophical questioning, that drive for clarity in language and for models of the world that are capable of empirical testing, is not in such circumstances the Sisyphean endeavour it might otherwise appear. --Jeff Petts

"Few writers and intellectuals command the awe and admiration accorded to Sir Isaiah Berlin, and with good reason. His wide-ranging erudition, humane scepticism and elegant prose set him apart" (Economist)

"Isaiah Berlin's many admirers and readers will be glad to have this book; and those too young to have had the chance to listen to his lectures might well begin their acquaintance by reading it" (British Book News)

"He left the moral quality of his voice behind him, in the long tumbling paragraphs and the clauses within clauses of his best essays, and it is to these that we can turn when we need to remind ourselves what intellectual life can be: joyful, free of illusion, and vitally alive" (Michael Ignatieff New York Review of Books)

"His writing reflects the diversionary excursions, unexpected self-interruptions and recommencements, of a great talker... We are assured in his company of a supremely intelligent, highly civilized approach to whatever he touches upon" (New York Times)

Book Description Paperback. Condition: Good. The book has been read but remains in clean condition. All pages are intact and the cover is intact. Some minor wear to the spine. Seller Inventory # GOR003069664

Book Description Oxford University Press, 1980. Paperback. Condition: Good. Connecting readers with great books since 1972. Used books may not include companion materials, some shelf wear, may contain highlighting/notes, may not include cdrom or access codes. Customer service is our top priority!. Seller Inventory # S_278901470

Book Description Paperback. Condition: Very Good. The book has been read, but is in excellent condition. Pages are intact and not marred by notes or highlighting. The spine remains undamaged. Seller Inventory # GOR004549352

Book Description Oxford University Press, 1980. Condition: Good. A+ Customer service! Satisfaction Guaranteed! Book is in Used-Good condition. Pages and cover are clean and intact. Used items may not include supplementary materials such as CDs or access codes. May show signs of minor shelf wear and contain limited notes and highlighting. Seller Inventory # 0192830279-2-4

Book Description Oxford University Press, 1980. Paperback. Condition: Very Good. WE ARE PROCESSING ORDERS AS NORMAL DURING THIS VIRUS EPIDEMIC, ALL ITEMS ARE SENT BY ROYAL MAIL. DISPATCHED FROM THE UK WITHIN 24 HOURS ( BOOKS ORDERED OVER THE WEEKEND DISPATCHED ON MONDAY) BY ROYAL MAIL. ALL OVERSEAS ORDERS SENT BY AIR MAIL. WE ALSO ACCEPT PAYMENT IN US DOLLARS OR EURO BY BANK TRANSFER. Seller Inventory # mon0000626231

10. Concepts and Categories. Philosophical Essays. Edited by H. Hardy. With and Introduction by B. Williams. (= Selected Writings).