Items related to The Oxford Book of Humorous Prose: From William Caxton... 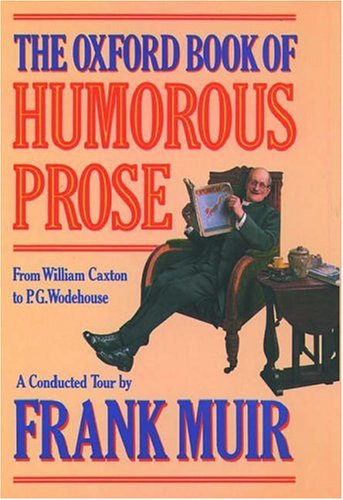 Frank Muir guides the reader through five centuries of humorous prose in the English language. Starting in London with William Caxton and a preface written and printed in 1477, and ending with P.G. Wodehouse whose last novel was published in 1977, the route is meandering: from England to Ireland and Scotland, back to England again, on to America, Canada, Australia, and New Zealand. There are examples chosen from humorous fiction, letters, and journalism written by over 200 authors and ranging from medieval jests to the "New Yorker" and Beachcomber; from Thomas Nashe and Tom Brown's galloping bawdy to Jane Austen and on to Garrison Keillor and Arthur Marshall; from the jokes in Samuel Johnson's "Dictionary" to Kingsley Amis's "Lucky Jim" and his hangover. The great humorous writers such as Charles Dickens, Mark Twain, and P.G. Wodehouse are given a kind of mini-anthology of their own so that the range and versatility of their work can be appreciated. The extracts are accompanied by a commentary which sets the writers in their historical context with items of contemporary gossip and anecdotal biography.

About the Editor: Frank Muir is a well-known British TV personality and author of the best-selling The Frank Muir Book.