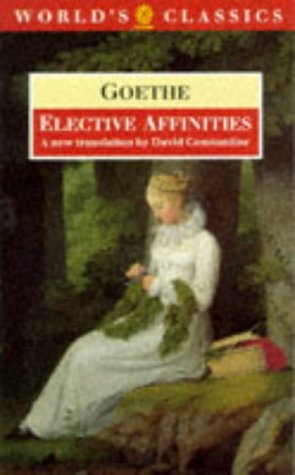 Goethe conducts an experiment with the lives of people who are living badly. Charlotte and Eduard, aristocrats with little to occupy them, invite Ottilie and the Captain into their lives - against morality, good sense and conscious volition all four are drawn into relationships as inexorably as if they were substances in a chemical equation. The novel asks whether there is free will or not. More disturbingly, it confronts its characters with the monstrous consequences of their repression of any real life in themselves. It seems that they are sunk so far in convention, fear and unnaturalness that a real life, or even the beginnings of one, must appear to them as something terrible and destructive. Goethe wrote "Elective Affinities" when he was 60 and long established as Germany's literary giant. He remained an uneasy and scandalous figure. David Constantine is the translator of Holderlein's "Selected Poems".

Johann Wolfgang Von Goethe was born in Frankfurt-am-Main in 1749. At twenty-four he wrote Goetz von Berlingen, a play which brought him national fame and established him in the Sturm und Drang movement. Goethe began work on Faust, and Egmont, another tragedy, before being invited to join the government at Weimer. He finished Faust before he died in 1832.

R.J. Hollingdale has translated eleven of Nietzsche's books and published two books about him. He is honorary president of the British Nietzsche Society.