Items related to Britain and the Jews of Europe, 1939-45 (Oxford paperbacks)

Wasserstein, Bernard Britain and the Jews of Europe, 1939-45 (Oxford paperbacks) 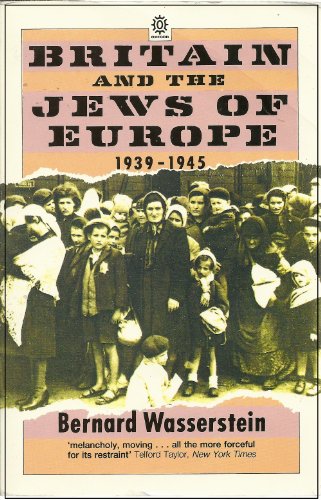 This book examines the policy of the British government towards the Jewish problem during the Second World War. For the duration of the war, the British government rejected proposals for saving even a small minority of the doomed Jews, whose escape routes it had already sealed. This was in spite of Anthony Eden's statement in 1942 that the Germans were "now carrying into effect Hitler's oft-repeated intention to exterminate the Jewish people of Europe". Based on archival sources, the book explores how and why Britain failed to help holocaust victims, examining such questions as the reasons for the near-total ban on Jewish refugee immigration to Britain, the restrictive immigration policy in Palestine, the failure to aid Jewish resistance in Europe, and the rejection of the scheme for the allied bombing of Auschwitz. Bernard Wasserstein is also the author of "The British in Palestine" (Royal Historical Society) and editor of two volumes of the letters of Chaim Weizmann.

About the Author Bernard Wasserstein is Professor of History and Chairman of the History Department at Brandeis University. His other books include The British in Palestine and The Secret Lives of Trebitsch Lincoln.

BRITAIN AND THE JEWS OF EUROPE 1