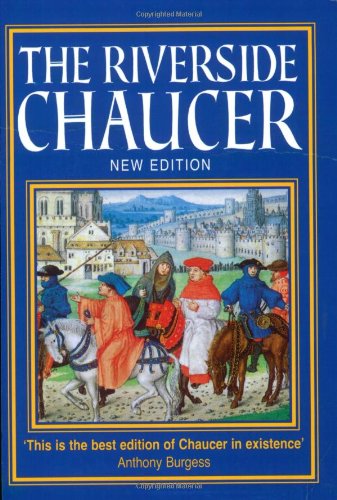 This peerless new edition of Chaucer's complete works is the fruit of many years' study, and replaces Robinson's famous edition, long regarded as the standard text. Freshly edited and annotated, the Riverside Chaucer is now the indispensable edition for students and readers of Chaucer.

'... indispensable for scholars and beginners alike ... Professor Larry D Benson ... deserves a medal both for organizing a formidable team of American and British scholars and for the excellence of his own contributions. IBooks -- IBooks

'an enormous advance on its predecessor ... particularly in its informative introductory materials, glossary ... and the addition of explanatory notes at the foot of each page. At well over 1,300 pages, it must be a bargain.' Country Life -- Country Life

`The Riverside Chaucer, like its predecessor and companion the Riverside Shakespeare, is beautiful to look at and a sensuous delight to handle. Within its stout covers the entire works of the father of English literature are displayed in fine clear type with very adequate footnote glossaries. The linguistic, historical and literary scholarship are a masterpiece of Anglo-American collaboration. The reading of Chaucer is made into an exquisite pleasure, not a philological chore. This is the best edition of Chaucer in existence.' Anthony Burgess -- Anthony Burgess