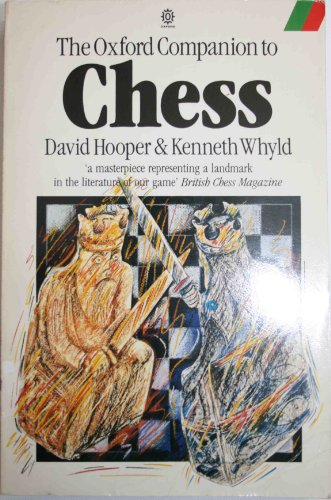 The game of chess exerts a fascination uequalled by any comparable activity, and recent years have seen an ever-increasing number of people playing the game. This Companion covers all aspects of chess, with over 650 entries describing more than 200 games, and named openings and their variations. The history of chess receives complete coverage, as do the major figures of the game, chess strategies, playing and problem terms, as well as related topics such as computers, and the representation of chess in art, literature and film. The usefulness of this volume is enhanced by a glossary of chess terms, and extensive illustrations integrated within the text. For players of all levels and for those who follow tournaments and championships, The Oxford Companion to Chess provides a wealth of useful and entertaining facts.

"It is a masterpiece representing a landmark in the literature of our game." -- Edward Winter, British Chess Magazine

About the Editors: David Hooper is a former British Correspondence Chess Champion, and the author of many books on chess. Kenneth Whyld is a former international player and a chess researcher of worldwide repute.

Book Description Paperback. Condition: Very Good. The book has been read, but is in excellent condition. Pages are intact and not marred by notes or highlighting. The spine remains undamaged. Seller Inventory # GOR002406705

Book Description Paperback. Condition: Good. The book has been read but remains in clean condition. All pages are intact and the cover is intact. Some minor wear to the spine. Seller Inventory # GOR001758935

Book Description Paperback. Condition: Good. A tan to the page edges/pages . Minor shelf wear Good condition is defined as: a copy that has been read but remains in clean condition. All of the pages are intact and the cover is intact and the spine may show signs of wear. The book may have minor markings which are not specifically mentioned. Most items will be dispatched the same or the next working day. Seller Inventory # wbb0020595495

Book Description Paperback. Condition: Used; Good. **Simply Brit** Shipped with Premium postal service within 24 hours from the UK with impressive delivery time. We have dispatched from our book depository; items of good condition to over ten million satisfied customers worldwide. We are committed to providing you with reliable and efficient service at all times. Seller Inventory # 1140909

Book Description Condition: Good. A+ Customer service! Satisfaction Guaranteed! Book is in Used-Good condition. Pages and cover are clean and intact. Used items may not include supplementary materials such as CDs or access codes. May show signs of minor shelf wear and contain limited notes and highlighting. Seller Inventory # 0192819860-2-4