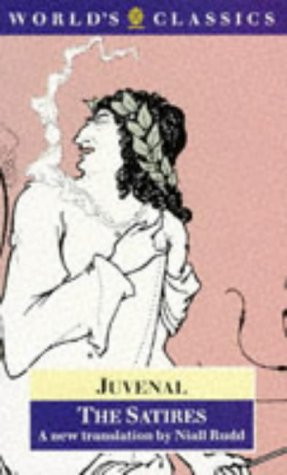 Juvenal, writing between AD 110 and 130, was one of the greatest satirists of Imperial Rome. His powerful and witty attacks on the vices, abuses and follies of the big city have been admired and used by many English writers, including Ben Jonson, Dryden and, most notably, Dr Johnson, who described his writing as a "mixture of gaiety and stateliness, of pointed sentences and declamatory grandeur". Juvenal has been seen as a stern moralist and, more recently, as an extravagant wit, and is acclaimed for his vivid description of the scenes which arouse his anger. He coined the famous phrase designating the people, "eager and anxious for two things only: bread and races" ("panem et circenses"). Niall Rudd's translation reproduces the original style and metrical effect of Juvenal's hexameters. William Barr's introduction and notes provide a literary and historical background to the 16 satires.

`I wholeheartedly welcome the publication of this book. It will be immensely helpful to those of us who have to teach Roman satire in translation and the general reader will find it a reliable and readable version of an author who still has much to say to us.'Raymond Astbury, University College, Dublin

`The translation itself goes a long way towards catching J.'s mixture of rhetoric and wit. It is lively and taut ... translation is excellent, not only the best available in English but also good to read, no bad thing as most of its readers will be Latinless.' F. Jones, University of Liverpool, The Classical Review, Vol. XLII, 1992

This volume presents a new commentary on the first book of satires of the Roman satirist Juvenal. Susanna Morton Braund situates Juvenal within the genre of satire and demonstrates his originality in creating an angry character who declaims in the 'grand style'. The essays on each poem present the first integrated reading of these Satires as an organic structure.

1. The Satires (The World's Classics)