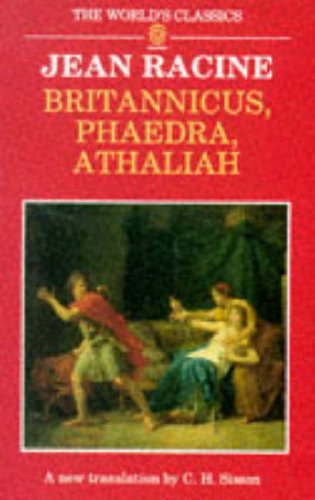 Jean Racine (1639-99) remains to this day the greatest of French poetic dramatists. Britannicus (1669), the first play in this volume, takes its themes from Roman history: the setting is the bloody and treacherous court of the Emperor Nero. Phaedra (1677) dramatizes the Greek myth of Phaedra's doomed love for her stepson Hippolytus. Athaliah (1691), Racine's last and perhaps finest play, draws on the Old Testament story of Athaliah, Queen of Judah and worshipper of Baal, who is threatened and finally forced to concede victory to Joash, a son of the house of David and survivor of Athaliah's massacres. Racine's tragedies portray characters wrestling with ambition, treachery, religion, and love. In this translation, specially commissioned for The World's Classics series, C.H. Sisson has captured the lucidity of Racine's language, both analytic and passionate, and the rhythm of his four-part Alexandrine.

Sisson's translation of the dramas is admirable. It is an accurate and sensitive rendition of the French text. The simple and flowing English creates a version which reads well and should succeed in performance too. (Akroterion)

Geoffrey Alan Argent is an independent scholar residing in Pennsylvania. He was the recipient of a 2011 American Book Award for The Fratricides, volume 1 of The Complete Plays of Jean Racine (Penn State, 2010).

Edgar Allan Poe was a poet, short-story writer, editor, critic, and one of the leaders of the American Romantics. C. H. Sisson was a poet, novelist, essayist, and polemicist.