Items related to Cecilia, or Memoirs of an Heiress (World's Classics...

Cecilia, or Memoirs of an Heiress (World's Classics S.) 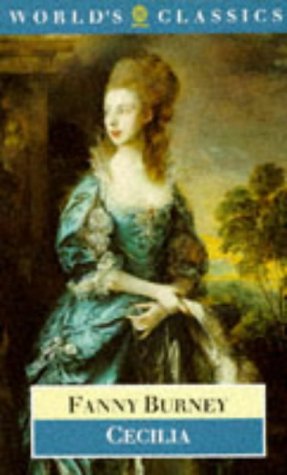 First published in 1782, this novel interweaves comedy, humanity and social analysis. In its satirical picture of the heroine's dismaying encounter with the gilded fashionable world, while also enjoying the attractions of an unusual love story, it caused controversy in its time. Cecilia is an "heiress" who can keep her estate if her husband will consent to take her surname. In playing upon the issue of the name, Burney makes us see the high cost of the patrilinear and the patriarchal. This edition presents the novel as it first appeared in 1782, while indicating changes Burney made to later editions. An introduction, bibliography and notes are provided, as well as several appendices.

'scholarly edition ... a welcome addition to the roster of available eighteenth-century texts ... Scholars will undoubtedly prefer this edition of Cecilia for its textual accuracy and will appreciate the help that the various appendices and the annotation will give to students' Elizabeth Brophy, College of New Rochelle, Eighteenth-Century Fiction

Frances Burney (Fanny Burney) was a British novelist who wrote four novels, eight plays, and one biography in her lifetime, and left behind 20 volumes of journals and letters after her death. Self-educated, Burney began writing at the age of 10, and published her first novel, Evelina, anonymously in 1778. Burney followed Evelina's success with Cecilia, Camilla, and The Wanderer, all of which explored the lives of English aristocrats and the role of women in society. Burney s novels were enormously popular during her lifetime, inspiring both Jane Austen and William Makepeace Thackeray, and her journals are recognized for their uncommonly accurate and candid portrayal of 18th-century England. Burney died in Bath, England, in 1840.

1. Cecilia, or Memoirs of an Heiress (Worlds Classic)