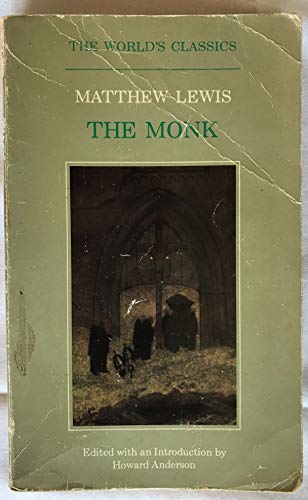 One of the most extravagantly dark works of Gothic fiction ever written in English, admired by the likes of Lord Byron and the Marquis de Sade, The Monk drew a firestorm of criticism when it was published in 1796. Contemporaries condemned it as "lewd," "libidinous and impious." "Lust, murder, incest, and every atrocity that can disgrace human nature," one critic cried, "brought together, without the apology of probability, or even possibility." Of course, it was an immediate best seller. Written by Matthew Lewis at the tender age of nineteen, The Monk tells of the violent downfall of the monk Ambrosio. Idolized by all Madrid for his spotless character, the proud Ambrosio is privately tormented with lust for Matilda and, once sated, with overpowering desire for the pure and innocent Antonia, whom he rapes and murders in the crypt of Saint Clare. Sentenced to death by the Inquisition, he sells his soul to the devil, with unusually bad results. But the plot is only part of the book's appeal. The Monk is a bubbling cauldron of Horror characters and motifs. Ghosts, murderous banditti, the Wandering Jew, a gypsy fortune teller, the Bleeding Nun, the Grand Inquisitor, and Satan himself all have roles in the drama. Characters are buried alive, tortured, tempted by demons, and torn apart by riotous mobs, in settings that include castles, monasteries, and dungeons. Stephen King, in his introduction to this edition, calls The Monk "a black engine of sex and the supernatural that changed the genre--and the novel itself--forever." Everyone who loves the novels of King will find this book irresistible.

Matthew Lewis wrote only one novel, The Monk, which made him a literary celebrity. Thereafter known as "Monk" Lewis, he wrote many plays, mainly spectacular melodramas and comedies, many of which proved extremely successful. He also produced some volumes of poetry, and was well respected as a poet.Stephen King is the best-selling author of dozens of novels, including such horror classics as The Shining, Carrie, Salem's Lot, Dreamcatcher, It, and Bag of Bones, to name just a few.

1. The Monk (The World's Classics)

2. THE MONK (THE WORLD'S CLASSICS)