Items related to The Murder of William of Norwich: The Origins of the...

Rose, E.M The Murder of William of Norwich: The Origins of the Blood Libel in Medieval Europe

The Murder of William of Norwich: The Origins of the Blood Libel in Medieval Europe 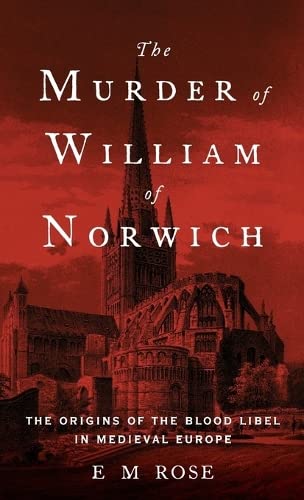 [EM Rose's] book is both a scrupulous dissection of anti-semitic imagery and a fascinating window into the medieval imagination. (Dominic Sandbrook, Books of the Year 2015, The Sunday Times)

A tremendous book. This is forensic historical reasoning allied to hugely readable storytelling: part murder mystery, part masterly thesis exploring a deeply unpleasant and sinister aspect of medieval culture, which is still of immense significance today. The Murder of William of Norwich is one the most stimulating pieces of serious historical storytelling I have read all year. (Dan Jones, The Sunday Times)

a medieval whodunnit with global implications which continue to this day ... a murder mystery every bit as thrilling as anything in the fictional genre ... This is a book which works on several levels; rattling murder yarn, authoritative social history; penetrative insight into the way the medieval mind worked. (Nigel Nelson, Tribune)

... [Rose has] delved into the record more deeply than most historians of the period to explain how the ritual murder story originated and was spread. It is to be hoped that her book will remind readers that the story was from the start a mendacious one - "No charge has withstood historical scrutiny," Rose writes - and that its repetition has been responsible for the shedding of much innocent blood. (Frank Freeman, Dublin Review of Books)

EM Rose's thorough, accessible and forensically researched study is a reminder of Judaism's sorrow-fillled history. It is also a pertinent warning about the dangers of greed, envy, paranoia and spreading rumours. (Patrick West, Catholic Herald)

an engrossing look not only at the mediaeval origin of one of Europe's oldest and most notorious conspiracy theories but also at the ways in which that story has been reused and repurposed in different contexts. (James Holloway, Fortean Times)

There is only one weapon against superstition enlightenment and there is nothing better suited for the struggle with ignorance than Emily Rose's book about William of Norwich. (Meduza)

A short review cannot do justice to Rose's painstaking examination of these charges of ritual murder, nor to the political and ecclesiastical climate in which they were brought ... Despite being confined to the 12th century, Rose's masterly treatment of the murder of William and the other children has an uncomfortable relevance for Christians engaged in dialogue with Jews, and deserves the widest readership. (Anthony Phillips, Church Times)

Rose, a meticulous and perceptive scholar, makes a strong case for her hypothesis that the cult was particularly promoted in northern France ... Rose's highly original conflation of sources from different historical traditions make for an important addition to the literature on the blood libel. Her focus on the civic life of the world in which it evolved, illuminated by a thoroughly documented account of the people who drove it, also makes her book a fascinating contribution to our understanding of the high medieval period. (Mark Glanville, Jewish Quarterly)

E.M Rose is a historian based in Princeton, NJ. She has taught at Johns Hopkins University, Villanova University, Princeton University, and Baruch/CUNY.

1. The Murder of William of Norwich

2. The Murder of William of Norwich

3. The Murder of William of Norwich

4. The Murder of William of Norwich: The Origins of the Blood Libel in Medieval Europe (Hardback)

Book Description Oxford University Press Inc, United States, 2015. Hardback. Condition: New. Language: English. Brand new Book. In 1144, the mutilated body of William of Norwich, a young apprentice leatherworker, was found abandoned outside the city's walls. The boy bore disturbing signs of torture, and a story soon spread that it was a ritual murder, performed by Jews in imitation of the Crucifixion as a mockery of Christianity. The outline of William's tale swiftly gained currency far beyond Norwich, and the idea that Jews engaged in ritual murder became firmly rooted in the Europeanimagination.E.M Rose's engaging book delves into the story of William's murder and the notorious trial that followed to uncover the origin of the ritual murder accusation-known as the "blood libel"-in western Europe in the Middle Ages. Focusing on the specific historical context-the 12th-century reform of the Church, the position of Jews in England, and the Second Crusade-and suspensefully unraveling the facts of the case, Rose makes a powerful argument for why the Norwich Jews (and particularly oneJewish banker) were accused of killing the youth, and how the malevolent blood libel accusation managed to take hold. She also considers four "copycat" cases, in which Jews were similarly blamed for the death of young Christians, and traces the adaptations of the story over time. In the centuries after its appearance, the ritual murder accusation provoked instances of torture, death and expulsion of thousands of Jews and the extermination of hundreds of communities. Although no charge of ritual murder has withstood historical scrutiny, the concept of the blood libel is so emotionally charged and deeply rooted in cultural memory that it endures even today. Rose's groundbreaking work, driven by fascinating characters, a gripping narrative, and impressive scholarship,provides clear answers as to why the blood libel emerged when it did and how it was able to gain such widespread acceptance, laying the foundations for enduring anti-Semitic myths that continue to the present. Seller Inventory # AAC9780190219628

5. The Murder of William of Norwich: The Origins of the Blood Libel in Medieval Europe

6. Murder of William of Norwich (Hardcover)

Book Description Hardcover. Condition: New. Hardcover. In 1144, the mutilated body of William of Norwich, a young apprentice leatherworker, was found abandoned outside the city's walls. The boy bore disturbing signs of torture, and a story spr.Shipping may be from multiple locations in the US or from the UK, depending on stock availability. 416 pages. 0.596. Seller Inventory # 9780190219628

7. The Murder of William of Norwich: The Origins of the Blood Libel in Medieval Europe

8. The Murder of William of Norwich: The Origins of the Blood Libel in Medieval Europe

9. Murder of William of Norwich (Hardcover)

Book Description Hardcover. Condition: New. Hardcover. In 1144, the mutilated body of William of Norwich, a young apprentice leatherworker, was found abandoned outside the city's walls. The boy bore disturbing signs of torture, an.Shipping may be from our Sydney, NSW warehouse or from our UK or US warehouse, depending on stock availability. 416 pages. 0.596. Seller Inventory # 9780190219628