Items related to The Seville Communion 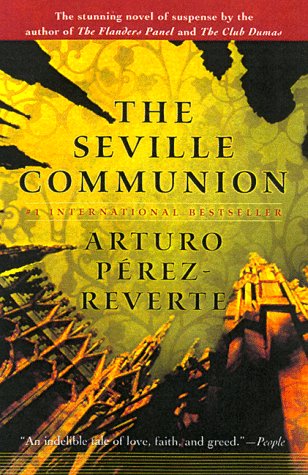 A hacker cracks Vatican security and sends an urgent plea directly to the Pope: Save Our Lady of the Tears. The crumbling Baroque church, located in the heart of Seville, is slated for demolition, and two of its defenders have recently died. Accidents - or murders? The Vatican promptly dispatches Father Lorenzo Quart, their worldly and enormously attractive emissary, to investigate the situation and track down the hacker, known to the Vatican only as Vespers. Father Quart's search for Vespers leads him to Father Priamo Ferro, the coarse and zealous parish priest, who has the full devotion of his small flock; Sister Gris Marsala, a former nun from California who is determined to restore the church; Pencho Gavira, the ambitious young vice-chairman of the Cartujano Bank; his estranged wife, Macarena, a perfect Andalusian beauty whose aristocratic family is closely linked to the church's history; Macarena's mother, the Duchess of El Nuevo Extremo, an elegant insomniac with a taste for Coca-Cola; and Honorato Bonafe, a tabloid reporter bent on getting the dirt on everyone. Father Quart is slowly seduced by the splendor of Seville - and the beauty of Macarena. As time runs out on the church, he is caught between powerful developers who have a stake in Our Lady of the Tears and his loyalty to the Vatican and his own vows.

In The Flanders Panel, Spanish novelist Arturo Pérez- Reverte set his elegant literary mystery in the heady worlds of high art and competitive chess. His next novel, The Club Dumas, was a magical brew of antiquarian books, satanic manuals and fallen angels. P&ecaute;rez-Reverte's third thriller translated into English moves from fallen angels to fallen clerics as he explores the labyrinthine politics of the Roman Catholic Church. The Seville Communion begins in the Vatican with a hacker code- named "Vespers" breaking into the pope's personal computer and leaving a cryptic message: "In Spain, in Seville, there is a place where merchants are threatening the house of God and where a small seventeenth century church kills to defend itself..." Pérez-Reverte then introduces his flawed hero, Father Lorenzo Quart, a valuable operative in the Holy Office's Institute for External Affairs (known as "the dirty works department," by some members of the Curia). It's his job to go to Seville, investigate two mysterious deaths at Our Lady of the Tears and discover the identity of Vespers.

Once in Seville, Father Quart finds himself collar-deep in intrigue: There is the wealthy banker who wants the land the church stands on and his beautiful, estranged wife who will do anything to thwart him. There is Father Ferro, the fierce parish priest and Sister Gris Marsala, an American nun and architect, both intent on saving Our Lady of the Tears. There are also three endearing villains-for-hire who steal every scene they are in. P&ecaute;rez-Reverte skillfully weaves murder, mystery, and corrupt politics--both sacred and profane--through his story before arriving at his trademark unpredictable ending. The Seville Communion lacks some of the passion and quirky originality that infused both The Club Dumas and The Flanders Panel; his protagonist, Father Quart, is burdened by being described as devastatingly attractive--"like Richard Chamberlin in The Thornbirds but more manly;" the object of his reluctant affection, Macarena, is perfectly stunning and neither is as interesting as the secondary characters who populate the book. Fortunately, the supporting cast, ranging from a washed-up boxer to an impoverished duchess, is delightful, the story is well-crafted and well-written, and Seville itself casts a spell over the proceedings making The Seville Communion an entertaining way to spend a few hours. --Alix Wilbur

"One of those infrequent whodunits that transcend the genre. . . . [with] page-turning pace and vivid characters. -Time "The master of the intellectual thriller is not an American or British writer, but Spaniard Arturo Perez-Reverte, one of the most creative and devilishly complex authors of the '90s. This is a beautifully and intricately written noir in which unique plots and counterplots abound. Perez-Reverte should be lauded for his originality and his richly drawn characters." -San Francisco Examiner "An elegant thriller that is as much about the elusive quest for happiness as it is about solving the murders. Beautifully translated, this is a book to be savored. It is as rich and complex as the best of the golden sherries produced in the wineries around Seville." -The Denver Post "With a vivid eye for place and personality, and an ability to provoke deep questions, Spain's bestselling author weaves an indelible tale of love, faith and greed that will keep readers shouting ole!" -People (Page-Turner of the Week)

3. The Seville Communion. Translated from the Spanish by Sonia Soto