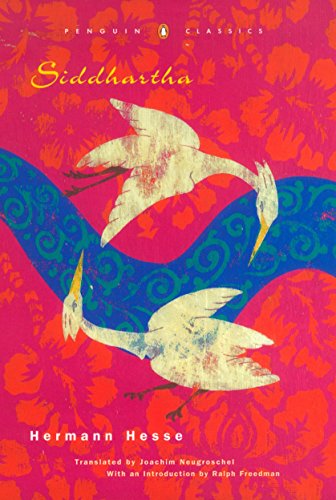 Finally after hearing so much about this book from a couple of people who claimed that their life changed for the better after reading this book, I finally managed to get my hands on this masterpiece by Hermann Hesse. It is a natural tendency with me to not be overly satisfied with anything from which I have great expectations. Same was the case with this book. I was expecting it to be mind-blowing which it did not turn out to be. Maybe being a Hindu myself and having reasonable knowledge of the vedas, theory of Karma and our Hindu teachings pertaining to the 4 stages in a man's life, I cannot honestly say that I learnt anything new about spirituality from this book, which wasn't already known to me. Having grown up watching Ramayana, Mahabharata, Chanakya, Ashoka and other similar shows on TV, this book for me was not really an eye opener - unlike for many westerners. I must appreciate the bravado of Mr. Hesse, a westerner himself, to have undertaken such a complex subject to tackle and do a wonderful job. It is definitely a great book to read but my expectations got the better of me! --By JM on 14 November 2014

I had this one on my reading list for long but din't quite read it until recently and what an experience has it been. Its a short book, one can finish it in one sitting and would certainly get you hooked in the first 10 pages itself. Hermann Hesse's knowledge and perception of Hinduism is incredible. The main protagonist Siddhartha's story of self realization is conveyed in a very simple manner and yet its so impact full. The story makes one feel that there is certainly something wrong with the way we operate in our daily lives and there is more to us than just doing our chores in order to fulfill our sensory pleasures. For the spiritual, curious or for someone seeking a break from the regular genres, this is a MUST READ. --By siddharth srivastava on 16 May 2014

Indeed ,perserverance as well as deep plunge into the teachings of Buddha enabled Hesse to produce this gem of wisdom. Very deep. You have to read it again and again, specially the last chapter to grasp the very deepness of this book. Go buy it and read with utmost patience. --By Ankit Telang on 10 November 2015

In the 1960s, especially in the United States, the novels of Hermann Hesse were widely embraced by young readers who found in his protagonists a reflection of their own search for meaning in a troubled world. Hesse s rich allusions to world mythologies, especially those of Asia, and his persistent theme of the individual striving for integrity in opposition to received opinions and mass culture appealed to a generation in upheaval and in search of renewed values. Born in southern Germany in 1877, Hesse came from a family of missionaries, scholars, and writers with strong ties to India. This early exposure to the philosophies and religions of Asia filtered and interpreted by thinkers thoroughly steeped in the intellectual traditions and currents of modern Europe provided Hesse with some of the most pervasive elements in his short stories and novels, especially Siddhartha (1922) and Journey to the East (1932). Hesse concentrated on writing poetry as a young man, but his first successful book was a novel,Peter Camenzind (1904). The income it brought permitted him to settle with his wife in rural Switzerland and write full-time. By the start of World War I in 1914, Hesse had produced several more novels and had begun to write the considerable number of book reviews and articles that made him a strong influence on the literary culture of his time. During the war, Hesse was actively involved in relief efforts. Depression, criticism for his pacifist views, and a series of personal crises combined with what he referred to as the war psychosis of his times led Hesse to undergo psychoanalysis with J. B. Lang, a student of Carl Jung. Out of these years came Demian (1919), a novel whose main character is torn between the orderliness of bourgeois existence and the turbulent and enticing world of sensual experience. This dichotomy is prominent in Hesse s subsequent novels, including Siddhartha (1922), Steppenwolf (1927), and Narcissus and Goldmund (1930). Hesse worked on his magnum opus, The Glass Bead Game (1943), for twelve years. This novel was specifically cited when he was awarded the Nobel Prize for Literature in 1946. Hesse died at his home in Switzerland in 1962.

Book Description Penguin Books India Pvt Ltd, India, 2003. Paperback. Condition: New. Deluxe. Language: English. Brand new Book. A bold translation of Nobel Prize-winner Herman Hesse's most inspirational and beloved work, which was nominated as one of America's best-loved novels by PBS's The Great American ReadA Penguin Classics Deluxe Edition Hesse's famous and influential novel, Siddartha, is perhaps the most important and compelling moral allegory our troubled century has produced. Integrating Eastern and Western spiritual traditions with psychoanalysis and philosophy, this strangely simple tale, written with a deep and moving empathy for humanity, has touched the lives of millions since its original publication in 1922. Set in India, Siddhartha is the story of a young Brahmin's search for ultimate reality after meeting with the Buddha. His quest takes him from a life of decadence to asceticism, through the illusory joys of sensual love with a beautiful courtesan, and of wealth and fame, to the painful struggles with his son and the ultimate wisdom of renunciation. This new translation by award-winning translator Joachim Neugroschel includes an introduction by Hesse biographer Ralph Freedman. For more than seventy years, Penguin has been the leading publisher of classic literature in the English-speaking world. With more than 1,700 titles, Penguin Classics represents a global bookshelf of the best works throughout history and across genres and disciplines. Readers trust the series to provide authoritative texts enhanced by introductions and notes by distinguished scholars and contemporary authors, as well as up-to-date translations by award-winning translators. Seller Inventory # BTE9780142437186

Book Description Penguin Classics, 2002. Paperback. Condition: New. Paperback. Herman Hesse's Siddhartha is perhaps the most important and compelling moral allegory the 20th century ever produced. Integrating Eastern and Western spiritual traditions with psychoa.Shipping may be from multiple locations in the US or from the UK, depending on stock availability. 176 pages. 0.331. Seller Inventory # 9780142437186