Items related to A Tale of Two Cities (Penguin Classics) 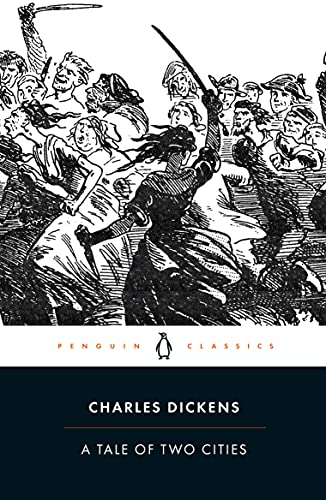 Vividly interweaving epic historical drama with personal tragedy, Dickens's gripping novel depicts the lives of two very different men, Charles Darnay, an exiled French aristocrat, and Sydney Carton, a disreputable but brilliant English lawyer, as they become enmeshed through their love for Lucie Manette, the daughter of a political prisoner. From the tranquil roads of London, they are drawn against their will to the vengeful, bloodstained streets of Paris at the height of the Reign of Terror, and they soon fall under the lethal shadow of La Guillotine.

Edited with an Introduction and notes by Richard Maxwell

"[A Tale of Two Cities] has the best of Dickens and the worst of Dickens: a dark, driven opening, and a celestial but melodramatic ending; a terrifyingly demonic villainess and (even by Dickens' standards) an impossibly angelic heroine. Though its version of the French Revolution is brutally simplified, its engagement with the immense moral themes of rebirth and terror, justice, and sacrifice gets right to the heart of the matter . . . For every reader in the past hundred and forty years and for hundreds to come, it is an unforgettable ride."-from the Introduction by Simon Schama

One of Dickens's most exciting books, set against the backdrop of the French revolution

4. A Tale of Two Cities (Paperback)

Book Description Paperback. Condition: New. Updated and REV ed. Language: English. Brand new Book. 'It was the best of times, it was the worst of times.' Charles Dickens's A Tale of Two Cities portrays a world on fire, split between Paris and London during the brutal and bloody events of the French Revolution. After eighteen years as a political prisoner in the Bastille the aging Dr Manette is finally released and reunited with his daughter in England. There, two very different men, Charles Darnay, an exiled French aristocrat, and Sydney Carton, a disreputable but brilliant English lawyer, become enmeshed through their love for Lucie Manette. From the tranquil lanes of London, they are all drawn against their will to the vengeful, bloodstained streets of Paris at the height of the Reign of Terror and soon fall under the lethal shadow of La Guillotine. This edition uses the text as it appeared in its first serial publication in 1859 to convey the full scope of Dickens's vision, and includes the original illustrations by H.K. Browne ('Phiz'). Richard Maxwell's introduction discusses the intricate interweaving of epic drama with personal tragedy. For more than seventy years, Penguin has been the leading publisher of classic literature in the English-speaking world. With more than 1,700 titles, Penguin Classics represents a global bookshelf of the best works throughout history and across genres and disciplines. Readers trust the series to provide authoritative texts enhanced by introductions and notes by distinguished scholars and contemporary authors, as well as up-to-date translations by award-winning translators. Seller Inventory # AAZ9780141439600