Items related to The Invisible Dog 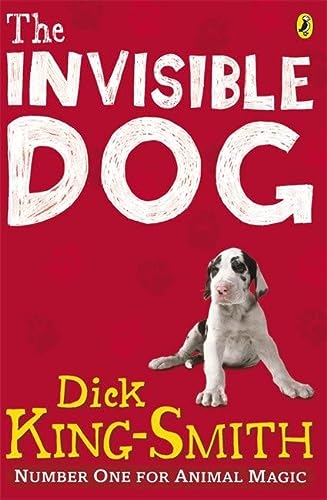 The story of a girl who tries to satisfy her yearning for a dog by introducing an imaginary Great Dane called Henry to the house. Her wish comes true and she is allowed a real Henry - but there's more than a hint that old Mrs Garrow, with her cackling laugh and black cat, may have been involved.

"King-Smith has created another irresistible yarn."--"Booklist.

Dick King-Smith served in the Grenadier Guards during the Second World War, and afterwards spent twenty years as a farmer in Gloucestershire, the county of his birth. Many of his stories are inspired by his farming experiences. Later he taught at a village primary school. His first book, The Fox Busters, was published in 1978. He wrote a great number of children's books, including The Sheep-Pig (winner of the Guardian Award and filmed as Babe), Harry's Mad, Noah's Brother, The Hodgeheg, Martin's Mice, Ace, The Cuckoo Child and Harriet's Hare (winner of the Children's Book Award in 1995). At the British Book Awards in 1991 he was voted Children's Author of the Year. In 2009 he was made OBE for services to children's literature. Dick King-Smith died in 2011 at the age of eighty-eight.

Book Description Puffin, 2010. Paperback. Condition: Used; Good. Dispatched, from the UK, within 48 hours of ordering. This book is in good condition but will show signs of previous ownership. Please expect some creasing to the spine and/or minor damage to the cover. Seller Inventory # CHL1020836

Book Description Puffin. Paperback. Condition: Good. No Jacket. A copy that has been read, but remains in clean condition. All pages are intact, and the cover is intact. The spine may show signs of wear. Pages can include limited notes and highlighting, and the copy can include previous owner inscriptions. At ThriftBooks, our motto is: Read More, Spend Less. Seller Inventory # G0141332379I3N00

Book Description Puffin. Paperback. Condition: Very Good. No Jacket. A copy that has been read, but remains in excellent condition. Pages are intact and are not marred by notes or highlighting, but may contain a neat previous owner name. The spine remains undamaged. At ThriftBooks, our motto is: Read More, Spend Less. Seller Inventory # G0141332379I4N00

Book Description Paperback. Condition: Very Good. The book has been read, but is in excellent condition. Pages are intact and not marred by notes or highlighting. The spine remains undamaged. Seller Inventory # GOR003953726

Book Description Paperback. Condition: Good. The book has been read but remains in clean condition. All pages are intact and the cover is intact. Some minor wear to the spine. Seller Inventory # GOR003045053

Book Description Paperback. Condition: Fair. A readable copy of the book which may include some defects such as highlighting and notes. Cover and pages may be creased and show discolouration. Seller Inventory # GOR003955009

Book Description Penguin Books, Limited, 2010. Condition: Good. Re-issue. Ships from the UK. Former Library book. Shows some signs of wear, and may have some markings on the inside. Seller Inventory # GRP63160929