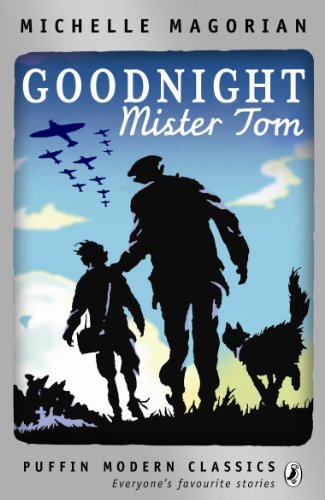 Young Willie Beech is evacuated to the country as Britain stands on the brink of the Second World War. A sad, deprived child, he slowly begins to flourish under the care of old Tom Oakley - but his new-found happiness is shattered by a summons from his mother back in London . . .

"The best books grow old gracefully. They retain their importance and affect each new generation as powerfully as the one before. These are the titles selected for Puffin Modern Classics" - Julia Eccleshare

Michelle Magorian was born in Portsmouth and on leaving school studied at the Rose Bruford College of speech and Drama and Marcel Marceau's International School of Mime in Paris. Over the years she became interested in children's books and decided to write one herself. The result was Goodnight Mister Tom, which won the Guardian Children's Fiction Award, an International Reading Association Award and was also made into a superb film starring the late John Thor.

Goodnight Mister Tom; Back Home; Waiting for my Shorts to Dry; Who's Going to take Care of Me?; Orange Paw Marks; A Little Love Song; In Deep Water; Jump; A Cuckoo in the Nest; A Spoonful of Jam; Be Yourself; Just Henry

The gruff and surly Mr Thomas Oakley is less than pleased when he is landed with a scrawny little city boy as a guest, but because it is compulsory that each villager takes in an evacuee he reluctantly agrees. It soon becomes obvious to Mister Tom that young Willie Beech is hiding something, and as the pair begin to form an unlikely bond and Willie grows in stature and in confidence he begins to forget the past. But when he has to return to war-torn London to face his mother again he retreats into his shy and awkward ways once more.

Goodnight Mister Tom is one of the most touching and powerful stories ever written. As the relationship between Willie and Tom begins to transform them both, Magorianąs powerful yet gentle writing tugs at the heart, taking the reader on an incredibly emotional journey that never once stoops to unnecessary sentimentality. --Susan Harrison

"An engrossing and poignant story, with much sunlight tobalance the darkness." -- "The New Yorker""Powerful."-- "The Read-Aloud Handbook"by Jim Trelease

Book Description Paperback. Condition: Used; Good. Dispatched, from the UK, within 48 hours of ordering. This book is in good condition but will show signs of previous ownership. Please expect some creasing to the spine and/or minor damage to the cover. Damaged cover. The cover of is slightly damaged for instance a torn or bent corner. Seller Inventory # CHL4193035

Book Description Condition: Good. The item shows wear from consistent use, but it remains in good condition and works perfectly. All pages and cover are intact (including the dust cover, if applicable). Spine may show signs of wear. Pages may include limited notes and highlighting. May NOT include discs, access code or other supplemental materials. Seller Inventory # 31UMYP0054IN_ns

Book Description Paperback. Condition: Good. The book has been read but remains in clean condition. All pages are intact and the cover is intact. Some minor wear to the spine. Seller Inventory # GOR004094501

Book Description Condition: Good. A+ Customer service! Satisfaction Guaranteed! Book is in Used-Good condition. Pages and cover are clean and intact. Used items may not include supplementary materials such as CDs or access codes. May show signs of minor shelf wear and contain limited notes and highlighting. Seller Inventory # 014132970X-2-4

Book Description Condition: Very Good. Shipped within 24 hours from our UK warehouse. Clean, undamaged book with no damage to pages and minimal wear to the cover. Spine still tight, in very good condition. Remember if you are not happy, you are covered by our 100% money back guarantee. Seller Inventory # 6545-9780141329703

Book Description Condition: Very Good. This book is in very good condition and will be shipped within 24 hours of ordering. The cover may have some limited signs of wear but the pages are clean, intact and the spine remains undamaged. This book has clearly been well maintained and looked after thus far. Money back guarantee if you are not satisfied. See all our books here, order more than 1 book and get discounted shipping. . Seller Inventory # 7719-9780141329703