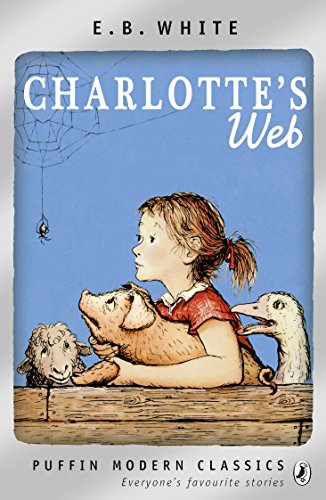 Charlotte's Web: A Puffin Modern Classic by E B White

This is the story of a little girl named Fern who loved a little pig named Wilbur and of Wilbur's dear friend, Charlotte A. Cavatica, a beautiful large grey spider. With the unlikely help of Templeton the rat, and a wonderfully clever plan of her own, Charlotte saves the life of Wilbur, who by this time has grown up to be quite a pig.

"The best books grow old gracefully. They retain their importance and affect each new generation as powerfully as the one before. These are the titles selected for Puffin Modern Classics" - Julia Eccleshare

E. B. White was born in New York in 1899 and died in 1985. He kept animals on his farm in Maine and some of these creatures crept into his books, such as STUART LITTLE which was made into a blockbusting film in 2000. He received many awards including the Laura Ingalls Wilder Medal in 1970, an award given every five years to authors who have 'made a substantial and lasting contribution to literature for children'.

Also by E B White:

Charlotte's Web; Stuart Little; The Trumpet of the Strong

An affectionate, sometimes bashful pig named Wilbur befriends a spider named Charlotte, who lives in the rafters above his pen. A prancing, playful bloke, Wilbur is devastated when he learns of the destiny that befalls all those of porcine persuasion. Determined to save her friend, Charlotte spins a web that reads "Some Pig", convincing the farmer and surrounding community that Wilbur is no ordinary animal and should be saved. In this story of friendship, hardship and the passing on into time, E.B. White reminds us to open our eyes to the wonder and miracle often found in the simplest of things.

'No child should be without a copy.' (The Daily Mail)

Book Description Puffin, 2010. Paperback. Condition: Good. Connecting readers with great books since 1972. Used books may not include companion materials, some shelf wear, may contain highlighting/notes, may not include cdrom or access codes. Customer service is our top priority!. Seller Inventory # S_279072706

Book Description Paperback. Condition: Very Good. The book has been read, but is in excellent condition. Pages are intact and not marred by notes or highlighting. The spine remains undamaged. Seller Inventory # GOR003496115